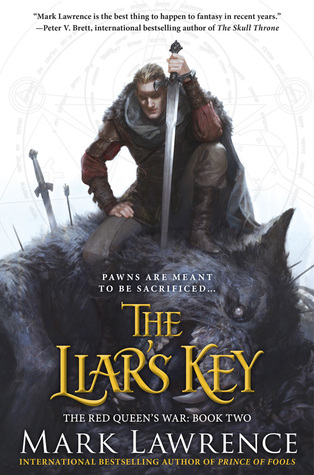 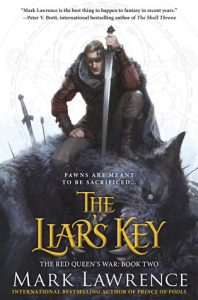 Mark Lawrence continues to make my reviewing his books harder with the second in his Red Queen’s War trilogy. What does that mean? Well it means I felt this book has some quite major flaws, it does a few things wrong… but when it does them right it does them RIGHT!

So the story picks up pretty much where it left off from Prince of Fools. There’s been a few months of Jalan sitting around drinking himself half to death and screwing anyone willing to lift her skirts, but we don’t hear much about that other than the odd wistful tale. No, this book is driven forwards by Loki’s Key and Snorri’s desire to put it to rather foolish use.

Usually I like to talk about the things I liked first, before moving onto those I didn’t, but with this one I’m swapping them around because I want to focus more on the things I liked. So… First off… Jalan still annoys the shit of out me. He’s not quite on Kvothe levels of making me want to crawl into the pages of the book to give him a slap, but at times he’s not too far off. It’s not that he sees himself as a coward and I quite like his pragmatism, but I just find him so utterly unlikable as a character. I don’t hate him, nor love him, I just find myself constantly rolling my eyes at him. Also, Snorri is an arsehole in this book.

So my other major gripe is the pacing. The story kinda feels like it plods along with very little purpose for the first three quarters, and then it finishes in a massive rush of glorious action and inventive characters and locations. Honestly, that finale is good enough to make up for all the rest, but getting through the rest did feel like a bit of a chore at times. My issue with the pacing was especially grating when Jalan went onto his solo side quest, because of aforementioned not liking the guy.

Anyways, onto the stuff I did like. And here’s where I will freely admit that Mark does something better than any other fantasy author I’ve read out there at the moment. Everything matters. It all pulls together in the end and when it does it also pulls the rest of the book into a focus that wasn’t there before. In some ways it’s kinda like a heist film where once it all goes off you sit there thinking “So that’s why that happened.” and “That’s why that thing is there.” And I think Mark has to do it all like that because his whole world is basically one big chess game. Hence the tag lines on the books. See what I mean? It all starts to make sense.

I’m just going to take a moment to point out I said a similar thing when I reviewed the Broken Empire trilogy. On their own the books were great, but it wasn’t until you viewed the series as a whole that it became AMAZING! Because it is at that point you realise the planning that has gone into it. One day I hope to sit down and play a game of chess against Mark Lawrence. So there, if you’re listening, Mark, I challenge you to a game of chess… please go easy on me.

What else did I love? The flashbacks. I wasn’t a big fan of the way they switch to present tense, but I love the story being told through them. I think I would quite happily sit down and read a story about young Alica Kendeth and her siblings as they struggle against their powerful foes. Although, I can’t help but see the Red Queen as Olivia Armstrong now (yes that’s a Full Metal Alchemist reference).

There were a few other things I really liked, but it’s hard to go into them without spoilers so I won’t.

For all its flaws, I really enjoyed The Liar’s Key. Its strengths more than make up for its flaws. There were times I wanted to give it 3 stars, but I overall I’m giving it a wavering 4 out of 5. And the biggest seal of approval I can give is that I’ve just now ordered The Wheel of Osheim on next day delivery.