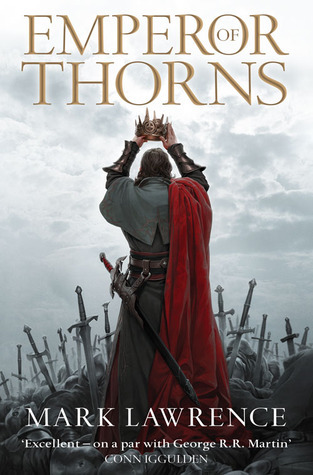 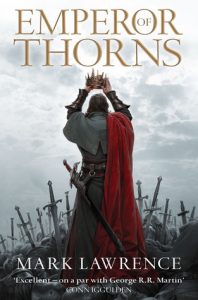 OK. What a ride. Mark Lawrence appears to be able to write good.
Where to start? Without spoilers. In this third book we complete the story of Jorg growing up. In Prince he felt very much like a child trying to fill big boots. In King felt like a defiant (often petulant) teen. Here we see him growing into adulthood and he does feel a lot more grownup. Many of his hard edges have been worn off by time, experience, and maturity. But he still has some pretty damned sharp edges.
I’m not going to lie. I’m going to struggle to review Emperor without reviewing the whole trilogy at the same time. On it’s own I give Emperor 4.5 stars (rounding up as always). Like the other two it’s a slow start and some of the more horrific acts are contained within that slow start and that made it a little difficult at times. But when the book picks up it goes full throttle and doesn’t stop.
In Emperor we’re again set across 2 different time lines, one of which is set before the culmination of events in King. It’s a masterpiece of planning and works very well despite the fact that we know how everything turns out. The present timeline takes place just before congression where Jorg plans to finally claim the throne of empire and deals with the mounting threat of the Dead King.
We also get to see a new point of view in Emperor. We get a welcome few chapters from Chella’s perspective and those are some of the most interesting in the book as we get to see just how she is dealing with being… well.. alive.
OK. So. Without spoilers. Emperor is awesome, as both Prince and King were awesome. It’s a worthy finale to a series that treads new ground and doesn’t shy away from being an arse and also shoving that arse in your face.
But I want to talk about the trilogy as a whole because that’s really where the series stands out. Individually I give the books 4.5 each, but as a whole I happily give them a 5.
Mark does such a good job of subverting the ‘hero’ trope. The Broken Empire isn’t just a story about an arsehole kid growing up to be a bit of an arsehole adult. It’s the story of antagonist. Jorg is the bad guy. He’s the villain. In any other story he would be the big bad that we hate and want our hero to take down. But in this story we find him to be insidiously charming even when he’s murdering the p***… actually, especially when he’s murdering the p***.
We see Jorg commit atrocious acts, hideous things that make him a horrible person. But we also see Jorg grow. Over the course of the trilogy we see him all throughout his years and you actually chart him growing up and we experience it. We actually ride along as he grows from a callous, damaged youth into a tempered, even more damaged adult.
AND we see this villainous hero of ours save the world and he certainly doesn’t do it by being good. Jorg Ancrath is Dr Doom. He’s a villain who honestly believes the world is better in his care than anyone else’s. And he’s right. And all of that just makes the ending even more poignant.
Of the trilogy, Emperor is the best, but King is my favourite. It’s my favourite because it empathises so well that Jorg is the villain by facing him off against a character who in most stories would be the hero. Yet their roles are reversed because of how attached we become to Jorg and his evil ways.
The Broken Empire has easily claimed a spot in one of my favourite fantasy series ever. EVER! It’s epic fantasy. It’s grimdark. Hells, in some ways it’s even YA, though the type of YA that would see Katniss hung by her own entrails within the first act.
So in summary: Damn you, Mark Lawrence! You made me love a true villain. Also, thanks for writing such an awesome story.