Craft: What Being a Pantser Means to Me

I’ve been seeing a few discussions flying around about craft. About the writing process and how it differs so much for each author. And, of course, the question… The question I probably get asked more than any other question:

When are you going to write more First Earth books?

No, not that one!

Are you a Pantser or a Planner?

I always answer the same by declaring myself the ultimate Pantser with no idea what I’m doing in a novel. The problem is it’s not entirely true. I do have some idea going in to a novel. It’s often a very flimsy idea though. Here’s a little checklist of things I often have:

So one of the things you might realise I’m missing there is themes. It’s true, I usually have no idea what the themes of the book will be until I’m deep in it. In Along the Razor’s Edge, it wasn’t until I was deep into the writing and into Eska as a character that I realised that depression, anxiety, and suicide would be major themes throughout the book and series.

That’s about where I normally start a book. As you can see, it’s not nothing. I like to think of it like having a map. 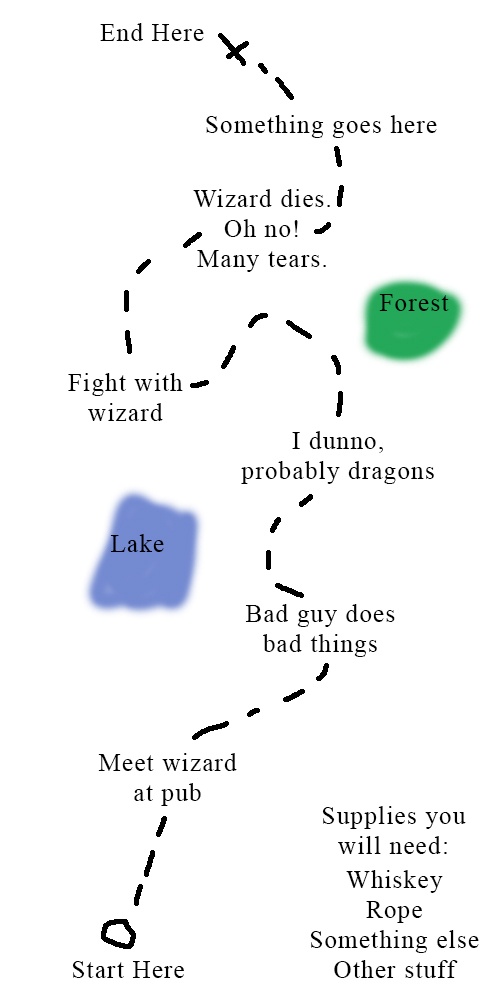 Well, kind of having a map. It’s largely unfilled. But as I progress through the story and the world, I fill in the map. I’d have a filled in map picture to share too, but I suck at making maps so it’s not happening.

I will point at that this method usually leads to a lot of editing. Once I’m finished the draft zero of a story, I have to go back and add in earlier details, make it look like I had an idea what I was doing all along, hide some cunning foreshadowing for events I never knew I was going to write. Trust me when I say Never Die was a mess until editing!

So this is how I work on the macro scale. It’s also how I’ve come to work on the micro scale. It’s what I’ve come to learn is called a Flashlight Process. When I come to write a chapter, I usually have a vague idea of what’s going to happen in the chapter. By vague I mean I usually know where it will start/end, who’s in it, what sort of thing I want to happen. I often have no idea what will happen after the next chapter though. I can only see as far as the flashlight reveals. Also, a moose occasionally walks into the light and stops in the middle of the road and no one can plan for moose.

And all of this brings me to my original point when I sat down to write this insane blog. I’ve recently been looking at the reasons I work this way. Don’t get me wrong, it does work for me. But I’ve been wondering why.

I’m the type of person who gets anxious and tired when I look at an entire journey. If I have to walk 50 miles, it’ll seem like an impossible journey and just thinking about will exhaust me and I’ll never get off my arse. But 1 mile? That’s doable. Hells, it’s easy. And once I’ve walked 1 mile, then how about another. Still short, still easy, definitely not exhausting. And then before I know it, I’ve walked 26 miles and that’s over half way. The rest of the journey still looks long, but it’s getting shorter by the step.

It’s a way of tricking myself (even though I know the trick) into making an impossible job seem easy by taking it one step at a time.

I’ve actually tried doing things differently. Planning out each and every story beat, character developments every step of the way, locations long before reaching them. It didn’t work. It seemed too big a job, too much to do. I couldn’t take it and convinced myself I was bored, found something else to do. The story died in its planning not because it wasn’t good and I didn’t want to write it, but because it seemed like too great a task.

So that’s what being a Pantser means to me. It’s a general outline of my process. And most importantly it’s the reason why I do it that way. It works! For me. That doesn’t mean it will work for everyone because everyone is different. But I honestly believe that one of the most important aspects of writing is finding a process that works for you, that you are comfortable with, and that is sustainable.