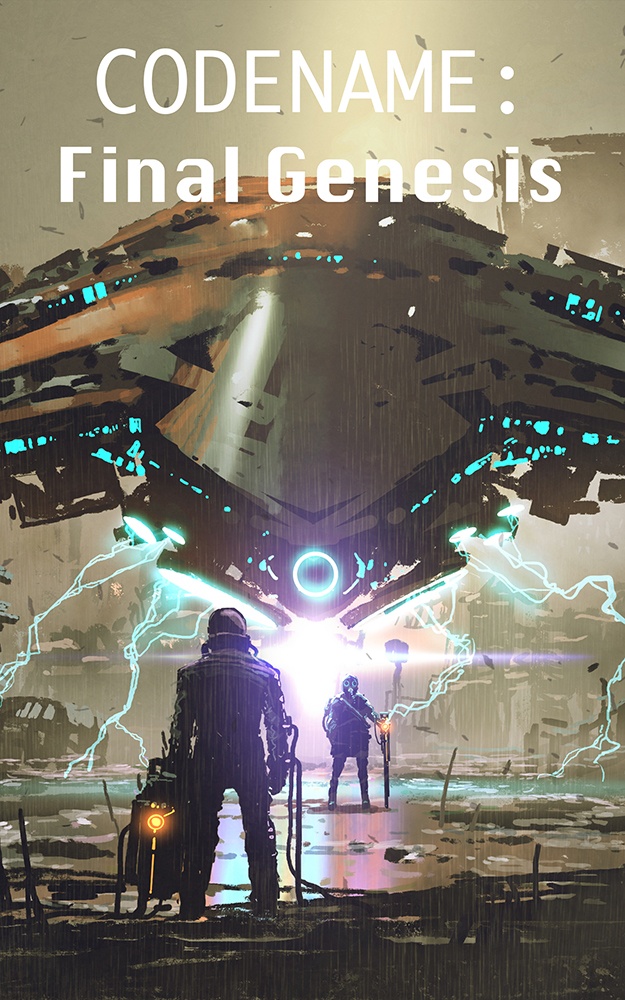 Iro blinked and when he opened his eyes he found himself stood between the Kharapid and Dobi. Neya’s sword was in his hands and he was swinging it. The Kharapid lurched back, arms flailing, and the sword bit home. The blade severed one of the monster’s limbs, and clanged to a halt against another, the carapace stopping it from cutting. The Kharapid leaned into Iro and he growled, staggering back a step from the monster’s massive strength. Another bladed limb slashed out over the top of the sword and Iro squeaked in alarm.

Iro felt his skin tighten just as the limb smacked him in the face hard enough to throw him down beside Dobi. The other boy collapsed, exhausted. But without his enhancement, Iro knew he’d be dead.

The Kharapid thrashed about. One limb was severed, another broken where it had connected with Iro’s stone-enhanced face. But it had plenty more limbs to use, and any one of them could kill them both. Iro staggered back to his feet and held Neya’s sword up, ready to defend. “I won’t let you,” He snarled at the monster.

The Kharapid scuttled forward, limbs reaching back to strike.

“Look out below,” a distant voice shouted. Iro glanced up to see a man soaring through the sky above him. The man spun once in mid-air, then started falling towards them. He had a massive slab of metal as a big a door over each of his arms. “CRUNCH!” The Vanguard shouted as he landed on top of the Kharapid, bringing both slabs of metal down on the monster so hard he crushed the carapace and squashed the monster like a bug. Blood and ichor sprayed out everywhere, hitting Iro in the chest.

“Oh yeah!” the Vanguard shouted. He was tall and lithe, dressed in a full suit of titan-forged armour that was painted white. His hair was dark and tied into a bun at the back of his head, and he grinned at Iro despite the green blood splattering his face. “That’s one for me already. You’re falling behind, Lara.”

The air shimmered beside Iro and a woman appeared. She was short and plump, her hair just as dark as the Vanguard’s, but tied into a tight braid. She did not smile. “Your vainglory almost got these idiot trainees killed, Ben.”

The Vanguard chuckled. “They had it under control. I just got in the way really. Right, kid?”

“Uh…” Iro mumbled. He couldn’t really think of anything to say.

“Thank you,” Dobi grumbled from behind. The other boy was still kneeling, cradling his right arm with his left, though both were bleeding.

The Vanguard waved a metal-clad hand in the air. If the giant slab of titan steel that extended up his arm weighed him down at all, he didn’t show it. “Not needed. Really, I’m sure you had it under control.” He stared straight at Iro. “You got some good instincts there, little Striker. Always protect your Enhancer.”

“Sure,” the Vanguard said. He stepped forward and swung the metal door at Iro, but pulled back before he hit. “Whoops, sorry about that.” He dropped the metal slab and clapped Iro on the shoulder. “What is it you Strikers say? Your life is your sword.”

The woman sighed. “Your sword is your life.”

“Same thing, no?” the Vanguard asked as he picked up the metal slab again with such ease it might have weighed less than a sock.

The Vanguard shrugged, then turned away to face the gloom of the engine room. “Time to get into the mix. You ready for this, Lara. SPEED!” And he sprinted away, disappearing into the gloom in seconds. A moment later, Iro heard him shout SMASH. He had a feeling the monster hit had probably not survived.

“Take your Enhancer back to the pods,” the woman said. “And if I see you in the fight again,” she leaned forward and stared Iro hard in the face. Her eyes were dark and looked lifeless, “I will kill you myself.” The air around her shimmered, and suddenly she was gone.

Iro stared into the engine room for a few seconds. He could still hear the sounds of fighting further in, but it had moved far beyond them now. The beachhead had been established, and the Hoppers would now have to hold it long enough to fill the pods with enough fuel to cart back to their respective ships.

He looked down at the sword in his hands. Shining silver blade, a splash of green blood where he had chopped off the Kharapid’s limb. He still had no idea what had happened. He couldn’t be a Striker. Classes ran in the family, passed down through blood. His mother was an Enhancer, so he should be too, like Neya was. But what about his father? Iro had never known his father, didn’t even know who the man was. Perhaps he had been a Striker. The shock of the revelation passed and Iro spun about to face Dobi.

The other boy grimaced at Iro and struggled to get a foot beneath him. Iro rushed forward to help, but Dobi shoved him away with his less injured arm. “Get off me. I don’t need your help.” He staggered back to his feet, then turned and started limping towards the pods.

Iro twisted his hands around the grip of Neya’s sword and stared at the blade again. He was a Striker. A Hopper. Or he could be at least. He could be a trainee, just like he’d always wanted. He looked about at the spilled blood, the slaughtered monsters, the Hoppers having their injuries treated at the pods. The fear came back hard. Did he still want to be a Hopper after seeing what it was like? Iro didn’t know the answer to that.

Iro trailed after Dobi. He didn’t know what to do now, but the Vanguard had told him to protect his Enhancer, and the woman had threatened to kill him if he went near the battle again. Iro figured the pods were probably the only safe place for him.

Cali and Mia were slumped by one of the pods. A surveyor loomed over them, tutting at Cali’s arm. A tablet floated nearby, a pen floating next to it. Whenever the Surveyor spoke, the pen scribbled on the tablet.

“Superficial cut, three inches down the left forearm, close to the ulna,” the Surveyor said. He was an older man, hair grey and cut short, and with dark bags beneath his eyes. “Recommend fifteen stitches, no further surgery required. Chance of significant scarring: forty percent.”

“Yes,” the surveyor said in a gruff voice. “You want to Hop, get used to them.”

“What if I don’t want to anymore?” Cali asked in a quiet voice.

The Surveyor didn’t answer. He moved on to Mia and started cataloguing her injuries, the floating pen and tablet recording every word.

Dobi stood nearby, cradling his arm. Iro formed up in front of the others, holding Neya’s sword out before him in what he thought was a ready stance, just in case any other monsters slipped past the lines.

“What happened?” Mia asked, looking at the Surveyor poking at her leg.

Dobi ground his teeth and said nothing. Iro couldn’t keep quiet. “I saved him. I’m a Striker.”

Dobi glared fury at him, and Iro took a step away from the other boy, but kept his sword up and held in both hands.

“I… uh… don’t know.” Iro said. It still didn’t make any sense to him, but he had felt his power activate. It flowed into Neya’s sword. He had disappeared and reappeared between the Kharapid and Dobi. He was a Striker.

A roar sounded from further within the engine room. Everything shook. Iro felt the vibrations through his feet. Another explosion rocked the cavernous room, so far back Iro could make out nothing but the flames. Screams drifted out of the gloom.

A few moments later, Hoppers started running back towards the pods. First there were just a few, then a lot. Master Tannow was with them, carrying a metal crate in his arms, and clearly straining from the effort. More Hoppers ran from the gloom, most of them carrying similar crates, or bags straining from the contents.

“Time to go,” Master Tannow said as he dropped the crate to the ground before them. He wiped a sheen of sweat from his head, and staggered, putting a hand on Iro’s shoulder and leaning against him. Iro struggled to stay upright. “Put that sword down before you hurt someone.”

“Did you know Useless is a Striker, master?” Cali asked.

Master Tannow stood straight again and stared down at Iro. Under the weight of that scrutiny, Iro wanted to crawl into the dark and hide. “What?” Master Tannow asked.

“He’s a Striker,” Dobi said. “He teleported in front of me or something. There was a Vanguard, Ben. He saw it all and said it was a Striker talent.”

Master Tannow nodded slowly. “We’ll sort that out later.” He ripped the lid off the metal crate to reveal hundreds of fist sized black pellets. “Put that sword down, Iro, and help me fill the cargo holds quick.”

They spent the next few minutes filling their own four pods’ cargo holds. All the while, more Hoppers, many of them injured, staggered back to the landing area. The noise from the engine room was growing closer, the roaring more frequent, the stomps shaking the metal flooring more violently.

Master Tannow sent Mia and Cali off first. With their pods refuelled, it was easy enough to set them to return home. Then he shoved Dobi into his pod and ordered Iro in as well. Dobi secured himself to the chair, and Iro knelt at his feet, clutching the metal frame. As Master Tannow wrestled with the pod door, trying to get it to close, Iro saw the monster charging out of the engine room. Vanguards fled before it, all hope at holding the thing at bay discarded. The monster roared, a sound like tearing bulkheads, and molten metal sprayed from its maw. It caught one of the fuel crates and the explosion ripped through the engine room.

Chapter 6 will be available next week.