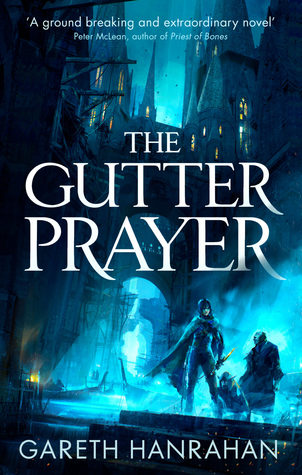 You’ll have to forgive me if this review is a little rambly. I didn’t get near enough sleep last night and one cup of tea doesn’t appear to the have the caffeine I need to get started today… How’s that for an introduction?

The Gutter Prayer by Gareth Hanrahan is an odd book. For a start it’s written in present tense, and I for one for that hard to get into. It’s a personal thing. Present tense just seems odd to me. It took me a while to really get my head around it, and every time I came back to the book I needed a few pages to adjust. It also disappears down the rabbit hole on a fairly regular basis. We often get entire paragraphs of characters’ inner monologues and they’re delivered in stinted, chaotic sentences. I offer up these oddities so I can then say this… I fucking loved this book.

I could go into depth about the characters and how they’re an unlikable bunch of rogues who you end up both liking and rooting for. Or the way the city is described which gives it a living, lived in feel that makes it stand out fully formed in the mind. Or the pacing, or the twists… but I won’t. Instead I’m going to talk about the coolness of the book.

Hanrahan is damned inventive and gives us a host of creepy and cool monsters, demons, and gods. From the Tallowmen, basically living candles made from melted down people. To the ghouls, creatures that evolve like pokemon as they consume the dead. To the Crawling Ones, communities of worms who take the shape of people and have crazy magic sorcery. To the stone men, humans with a disease that slowly turns them to stone, giving them incredible strength and toughness, basically turning them into walking tanks, before going too far and turning into living statues. To the saints, people or things acting as a conduit for one or many of the MANY Gods that roam the world. And it’s all set against a backdrop of a Godswar. A war between Gods taking place in the world all the time, blasting it, reshaping it, reshaping the people who inhabit it. It’s a fantastically inventive setting with a whole bunch of stuff you’ve never seen before and that is something that is rare in this day and age.

Well I did warn you I would probably ramble through this review.

Was it perfect? No. There were a few points where it slowed to a crawl and seemed to go nowhere. Some of the twists were so heavily telegraphed they were obvious. But dear Gods I enjoyed the hell out of it all. It’s charming, unique, horrifying, and exciting.