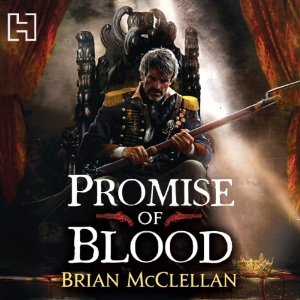 A book about manly men being angry at things!

Promise of Blood starts with a bang and I must admit I really enjoyed it at the start. We join the story amid a revolution; ageing general (and very angry man) Tamas overthrows the monarchy and the aristocracy, and plants himself at the head of the country.

‘The Age of Kings is dead. And I have killed it.’

We’re also quickly introduced to the magic system. There are Privileged, who are all round sorcerers. Knacked are those with special abilities such as never needing to sleep, or having an eidetic memory, or being able to tell when someone is lying. And there are Powder Mages who have the ability to consume black powder to make themselves superhuman, and also burn black powder to influence bullets after they have been fired, and also just explode black powder at will.

Look, here’s the thing about the magic system. It sounds cool as shit on the surface, but the deeper the book dug into it, and the more it tried to explain the rules of the various schools of magic, the more it all just fell apart. Privileged are special magic users who can do all sorts of things… but they need special gloves to do it or they’re harmless? So is it the people or the gloves that are magical? Black powder isn’t naturally occurring, it’s made by mixing substances together so what is it that is actually fueling the Powder Mages abilities? And why can they only manipulate bullets? And sometimes Privileged could swat entire armies with a click of their fingers, and other times they couldn’t do a damned thing about a guy with a bayonet. There seemed very little consistency throughout the whole thing and the deeper the book dug into the magic system the less sense it made and the more frustrating it got.

We follow 3… no wait, 4 characters. There’s Tamas, the spearhead of the revolution and the most powerful powder mage alive. He’s pretty cool character with some depth to him, and an iron will. It’s nice to have a story that focuses on an older character. We also ride along with Taniel, Tamas’ son and the best marksman in the world. And we have Adamat, a retired police inspector who has a knack for remembering things.

I think the first thing to note about the 3 characters is that they are very angry a lot of the time. Tamas is definitely the angriest, but the others are pretty angry all the time too. Even Adamat, who is supposed to be level headed apparently, has bouts of rage. It’s not just them either. Everyone in the book seems to be angry almost all the time… apart from the chef. He’s pretty chill.

Did I mention 4 characters? Oh yes, there’s a lass as well called Nila. She’s kinda there and bumbles about a bit. Honestly, I’ve never read a book where one of the major players feels so tacked on. It would not surprise me if she didn’t exist in an earlier edit, but somewhere along the line someone suggested having a female character involved maybe.

This review sounds like I hated the book, and that’s not entirely accurate. I really enjoyed the first half of the book. I thought it was great. But the more I got through the more frustrated I became at it. By the finale, I was actually rolling my eyes at bits.

So I’m giving Promise of Blood a 2.5 and doing my usual round up to 3. It’s alright, I guess. I don’t know if I’ll be moving on with the series.