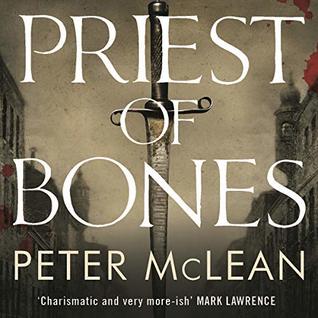 Priest of Bones is the story of Tomas Piety, a gangster conscripted and sent to war, only to return years later to find all his businesses have been taken over by other gangsters. But it’s more than that, a lot more. It’s the story of soldiers returning from a war they never wanted to fight, only to bring that war back with them, even long after the white flag was waved. It’s a story about soldiers having lived through the hell of a war zone, and finding that they never really leave it, that it follows them back home.

It’s told entirely in first person through the viewpoint of Tomas Piety, and we get a really good insight into his character, what makes him tick and what he both feels, and refuses to feel. He’s a complex character and brilliantly drawn. But we also get insight into some of the other characters as well, and its done in a very fluid way, usually with stories shared over a bottle of brandy. The characters felt real, they felt alive, and they felt haggard, pulled thin by the rigors and horrors of war.

As the story expands, the plot reveals itself a little more and Tomas soon finds himself drawn into turf wars, political intrigue, violence, and magic. But overall is that feeling that he has brought the war home with him, and his only way to deal with that fact, is to inflict it upon the city he loves, even as he’s trying to stop it from ever happening again.

The narrator, David Morley Hale, really helped bring the character of Tomas Piety to life with a quietly sinister tone that made me believe in the violence and compassion the character was capable of.

I give Priest of Bones 5 stars. It’s something special. And the sequel, Priest of Lies is out in just a few months so I’ll be chomping at the bit for that one.