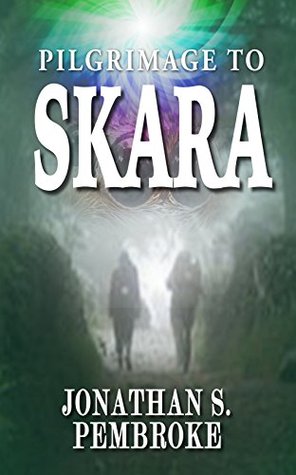 I’ve let this one sit for a bit, partly to decide on my rating and partly because I’m a terrible procrastinator.

Skara (as I shall be calling it) is about Pell Wendt, a retired pathfinder. This basically means he leads people with magical potential into the outlands beyond the realm of civilisation’s protection. There are shrines out in the badlands which gift potentials with magical abilities. The story picks up when Wendt is approached by his ex, asking him to take her daughter to one of these shrines. But not just any shrine, the most infamous of them all… Skara.

Honestly this book is a bit of a weird one. For the first half I thought it was a decent, if a little predictable, fantasy story. It happily adopts the trope of young boy/girl on a quest with an old (wise) mentor type. Except that it flips it slightly by being from the old mentor’s perspective. He’s a bit of a legend around his parts and is rather curmudgeonly in his old age. Not that he’s really that old, but he keeps pointing out that he thinks he’s old.

Wendt is an interesting enough character, if a little tropey, with a backstory miles long. Unfortunately, much of that back story is delivered by dry reminiscing on his part. One particularly long section like this almost felt like character notes had somehow made it into the story. It was just delivered so inorganically that it stood out like a sore thumb. Although the story is delivered entirely from the perspective of Wendt, we have a second main character who is along for almost all the ride.

Our 2nd main character is Keilie. She’s a pawn in a greater game and doesn’t really want magical powers at all. And she’s just so inconsistent that I found it tough to root for her. Her character evolution just kind of happens with no real catalyst.

And then about half way through the story, the relationship between the two characters starts to change… and it becomes awkward. It’s not easy to explain why without spoilers, but the only thing I can think of is that Keilie starts suffering from a fairly extreme sort of stockholm syndrome. Something about it just feels off the entire time and it’s never really addressed.

The world seems an interesting one, if a little small. There the civilisation, and a wall, and beyond that the outlands full of monsters and savages, and magic giving shrines. There is some hint of a larger world and purpose behind these shrines. That it could be technology rather than magic… but again it’s something which is just there and then forgotten.

The finale is blistering (perhaps a little too so), and when everything is wrapped up it feels like it was rushed a little.

I struggled with the score because I honestly wanted to give Skara 3 stars. I enjoyed it for the most part. But I feel there was just too much left unexplored. So 2 stars. Skara is a decent fantasy romp, with a nice twist on the old mentor trope.