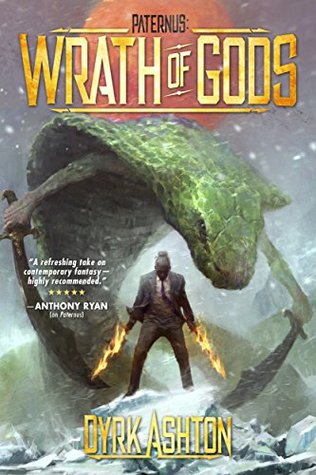 Paternus: Wrath of Gods is book 2 in Dyrk Ashton’s Paternus trilogy, and to review it I first need to say a little something about book 1. In Paternus, Dyrk broke all the rules. He wrote in present tense, gave us an omnipotent perspective that head hops at an impressive rate, and exposits all over the reader with infodumps. But somehow (I really don’t know how he did it) he made it work. Not only was the book a thrilling read about Gods (all of them) existing and getting into scrapes with each other, it was also a surprisingly human book that gave us likeable characters and ever increasing stakes. Right… that being said I can move onto book 2.

In Wrath of Gods Dyrk continues his blatant flaunting of the rules. We have the same tense, the same PoV, and the same expositional infodumps (though a fair amount fewer than in book 1), but he makes it bigger. WoG is bigger, badder, grander, more epic. It’s a book that hits the ground running and never stops in a mad dash for the finish line. The pace is relentless, though never feels forced, and Dyrk weaves tension into it with a fluid grace (which is impressive considering one of the major characters is literally indestructible). This time around the cast is larger, the stakes grow greater once more, and Dyrk happily flexes his knowledge muscles of religion, folklore, and mythology to the point where his clothing is obviously ripping at the seams.

This won’t be a long review, because I struggle saying much beyond the abstract when reviewing book 2s. If you’ve read Paternus (book 1), move straight onto Wrath of Gods and you will not be disappointed. If you’ve yet to give Dyrk’s insane series a go, get on it and prepare to leave your jaw rooted to the floor.