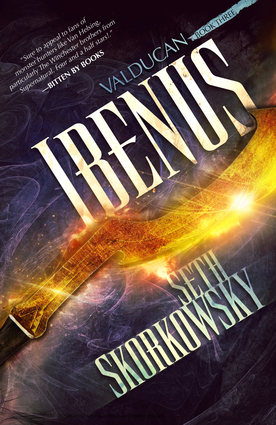 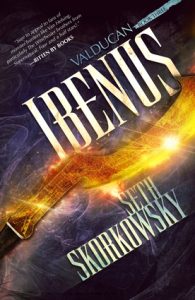 This book is the 3rd in Seth Skorkowsky’s Valducan series which follows an order of Templar-ish knights who bond to semi-sentient holy weapons which allows them to both kill demons and develop some pretty funky powers.

Unlike Damoren (which mostly followed Matt) and Hounancier (which mostly followed Malcolm), this book gives us a range of PoVs and Seth manages to make each character feel individual. It’s a nice change and gives us a much broader look at the world and at the Valducans. It also gives us a wider view of the various powers/abilities that the holy weapons grant their protectors. I really enjoyed this and I hope Seth comes up with some other crazy powers along the way.

The plot zips along at a fairly break neck pace and, while there are a few moments to stop and catch you breath they don’t drag that pace down. Basically it’s a bit of a page turner so don’t expect to putting it down once you pick it up.

We have a new demon for the Valducans to fight in the form of Mantismeres, giant bug things that create minions… minions who look like a spider crossed with a porcelain doll and wail like a baby. Yeah, cheers for that, Seth, because dolls weren’t freaky enough already. This is where the comparison to Aliens comes in because, due to the nature of the enemy they’re fighting, the finale plays out like Aliens with our Valducans being the colonial marines. It’s a wild ride!

It’s hard to review Ibenus without some references and comparison to the previous 2 installments so here goes (some minor SPOILERS will follow).

I had a problem with Hounancier in that it lowered the stakes so drastically. In Damoren our heroes saved the world. Boom! That’s about as high as stakes get. Hounancier went completely in a different route and it was a fight to save one man’s soul. It was a good book, but Damoren was tough to follow and dropping the stakes to such a personal level reeled back a lot of the tension. Ibenus doesn’t have this problem, they’re not saving the world, they’re maintaining it, but the stakes don’t seem small because it follows Hounancier and the stakes are larger. That’s a long winded way of saying the stakes aren’t that big but they feel big enough.

The other comparison I want to draw is that Damoren felt like a horror novel. We were introduced to characters only to see them murdered in horrific ways. It honestly felt like anyone could die and likely would. Hounancier felt more like a detective novel on crack, it was disjointed by its very nature, but read a bit like a mystery that needed solving. Ibenus read like more like an action novel with swords a swinging, guns a blazing, and an alien queen to stop. It’s fun. It doesn’t quite have the ‘anyone could die’ tension that Damoren had, but there’s a few wincy moments to be sure.

I do have a couple of issues. Some minor SPOILERS will follow.

There were a couple of things that were unexplained, or at least not well enough explored. There’s a holy weapon that bonds to two people at once and they apparently bond to each other as well. I felt this could have been explored a bit better because it left me with questions as to the nature of that bond and how much it impacted the relationship between the two characters.

My other issue is with a specific character who just felt bland and lacking any sort of soul or feeling. They die (I did say SPOILERS). The problem is the character felt as though death was their purpose in the book. I saw it coming because it was obvious they were there to add dramatic tension.

All in all I give Ibenus a solid 4 out of 5. A thoroughly enjoyable action-driven book about demons and the badass knights who slay them.