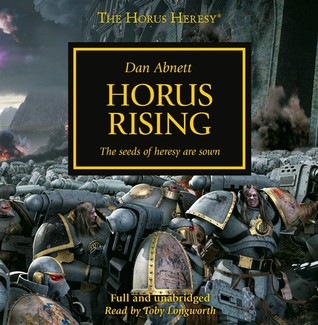 So after checking out the first Fabius Bile book in the 40k catalogue, I decided I wanted to try some others, and the Horus Heresy saga has always been interesting to me. So I asked a few friends and they came up with a reading list, somewhat predictably starting with book 1.

This is the story of the Space Marines and the rise of Chaos. More specifically it’s about the rise and fall of Horus, the Emperor of Mankind’s favourite son.

It’s a fairly tough book to review in many ways as it’s obviously part of a much larger franchise with books firing out all over the place, but I’ll certainly give it a damned good go.

The pace varies pretty wildly. It’s starts off blistering, slows to a crawl, then picks up, only to slow back to a crawl for the finale. And there isn’t really a finale. Things just kind of happen, and then we get a few hints about how they’re going to develop… in later books.

So what I’m saying is this. I really enjoyed Horus Rising. It kept me thoroughly entertained for all 12 hours of listening, but it’s definitely a book that’s setting up future volumes. So I guess I’ll be getting book 2 next.

A quick note on the narration. Toby Longworth knocks it out of the park. His performance was brilliant and really fit with what little I know of the Space Marines.