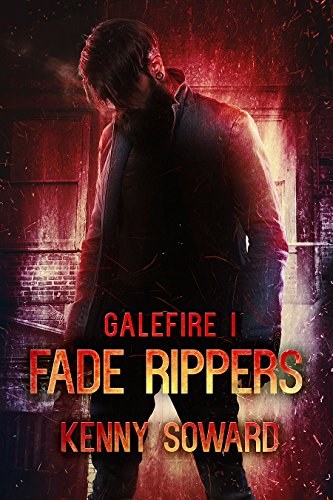 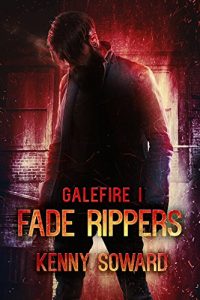 This review might be a little shorter than normal but it’s the morning of my holiday so I’m in a bit of a rush.

Galefire 1: Fade Rippers follows Lonnie, a small time crook working for a gang of… odd drug dealers. He soon starts to realise this gang isn’t entirely what it seems when they get into a gunfight with a bunch of monsters. Actual monsters. Oh and Lonnie also has vivid dreams of riding a dragon down in hell. Sounds odd? It is. Strangely enticing though.

The books opens in a hail of dragon fire (Galefire), bullets, and blood. Lonnie struggles to decide how much of it is real and whether or not his gang mates are actually trying to kill him… or fuck him… or just drug him up to his eyeballs. The opening act pretty doesn’t slow its pace at all and we’re carried into the second act before we have any clue what is going on. And it is there in the second act that the author (Kenny) heaps even more questions on us. The pace slows dramatically as we’re shown disjointed memories, drug addiction, and a man on the edge of breaking. Then the third act hits and the bullets and blood and fire all come rushing back in for a action finale that answers MOST of the questions the book has posed from the beginning.

It’s a well constructed story despite the arrested pace in the middle of the book. Honestly it’s not so much that the second act is slow but more the rapid deceleration from such an action heavy first act… and then the rapid acceleration into an equally action heavy third act. It gives the second act a strange, disjointed feel.

The characters are fun for the most part with a nice mix of personalities. Actually one of the things I really liked was how Kenny got specific accents across in the dialogue. I found myself actually reading Elsa and Ingrid with a German accent in mind. Very cool. The main character is a mess, but that’s clearly by design. Lonnie is a character who is struggling to remember who he is after years of drug abuse and memory shenanigans.

I had a couple of issues. First was the amount of sexy time the book threw at me. Now I’ve no problem with sexy time in books, I’ve even written a few steamy scenes myself, but there was quite a lot in this book given how short it was. The other issue was with the shortness of the book. There was no real time given over to explaining how the two worlds really interact, or how magic works, or whatever the fade is, or how drugs seem to affect magic. I feel the book needed to spend a little more time on world building so I wasn’t so confused. A lot of the time I was left thinking “OK, I’ll just accept this because I have no idea how the world works.”

So Galefire 1: Fade Rippers was a fun, action-filled yarn with plenty of bullets and blood and an interesting take on drug abuse. I give it 3.5 out of 5.