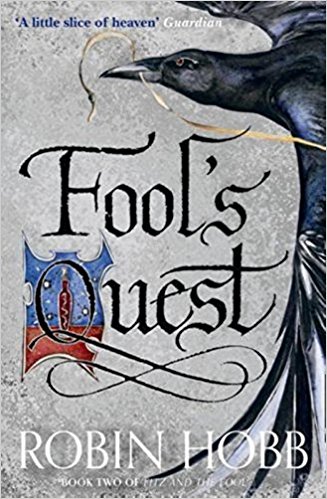 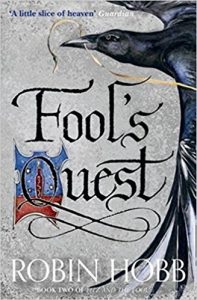 This is going to be a weird one to review. I’ll start with the TL;DR version. I LOVED THIS BOOK! This what the new Fitz book I’d been looking forward to. Now, don’t get me wrong, I really enjoyed Fool’s Assassin, but on some levels it really didn’t work for me. The first book in this new series was like a recap for the world and characters that I know and love. It was like reminiscing with old friends about those insane times we had when we were younger… while sitting around a cozy fire supping on a pint. There was no action, no adventure, nothing really new save for a new character. Fool’s Quest fixes that issue by giving Fitz… a quest.

There’s a lot more and also quite a bit less going on in this book. Gone are the lazy days of Withywoods and Fitz’s quiet life with Molly and Bee. In Fool’s Quest he finds himself thrown head first back into the swarming pit of Buckeep politics and intrigue. And I couldn’t be happier about that. Hobb has a flair for making spy work sound exciting… even when it’s actually just Fitz listening to some bloke about shipping taxes. Moving on Fitz finds his own quest, to recover his kidnapped daughter, and goes at it in true Fitz fashion. And later on he finally sets out on the Fool’s Quest. There is a lot happening. More characters to interact with, more locations to explore, more people to kill. But in some ways there is a bit less as well. We get fewer chapters from the perspective of Bee and those we do get aren’t so much about exploring her character, but more about exploring what her character means to the world.

This book deals heavily with pain and depression and anger, and riding along with Fitz we feel it. As usual with Hobb, she is a master at making you feel what the character is feeling by really putting you inside their head. At times you’re not sure if you’re you, or if you’re Fitz, or if you’re just some old friend he’s telling his story to. It’s immersive and mesmerising and bloody hard to put down.

BUT… the book doesn’t so much end, as pause half way through a section. It’s very much a 2nd book in an epic fantasy trilogy in this way. The tension ramps up and up, and then it just leaves you on a cliffhanger. It’s not necessarily a bad thing, but it didn’t feel like the end of a book so much as an acceptable place to stop.

Not a long review this time, but I’m finding it difficult to review without spoilers, especially because of its 2nd book feel. I’d say the general gist is, if you like Robin Hobb and Fitz and the Fool, you will love this book.

So it’s a 4 stars from me. Though that doesn’t really get across just how much I enjoyed reading it. Still, doesn’t quite manage the 5 stars I’d love to give it.