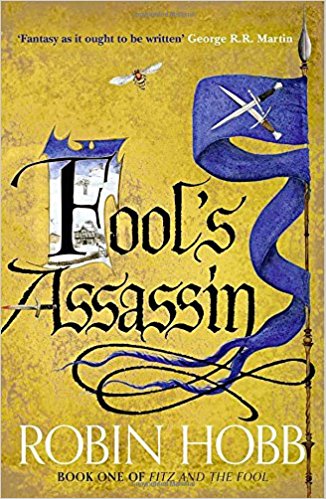 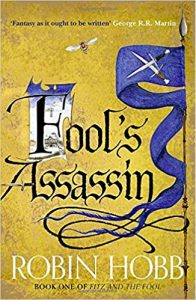 Where to start with this book? For those familiar with Robin Hobb’s Fitz books, this will need no introduction. It’s the 3rd series of books featuring our boy Fitz, and the emotional rollercoster he keeps dragging us on. For anyone not familiar with the character, you should really go back and read Assassin’s Apprentice… and then the rest of the Farseer trilogy… and then the Tawny Man trilogy. Not to give too much away, but Fitz is one of the most complex and relatable characters in fantasy literature, and the world he inhabits is both rich and wonderfully realised. Reading this book was like meeting up with old friends I haven’t seen in years; not the awkward meeting up though, but that falling straight back into a lifelong friendship style of reacquainting.

So the book picks up years after the end of Tawny Man. Fitz and Molly are finally together and happy and living peacefully on the Withywoods estate, away from court intrigue and world-threatening events. Actually, 90% of the book is set inside the manor at Withywoods, and it’s a testament to Hobb’s writing that it never gets boring despite the fairly stale location. Now the 1st third of the book is a little bit… odd. There is a lot of reminiscing, almost like an extended prologue where Hobb reminds us of everything else Fitz has done in his life, everything that has led up to where he is. For some it might become a little tiresome, especially for those hammering straight on after reading Fitz’s past accomplishments, but for me it was kinda wonderful. It’s been years since I read Tawny Man and, though I haven’t forgotten it, having that reminder made me think back over the highs and lows of Fitz’s life, and the desire to re-read the previous two series was strong. STRONG!

We get a lot of time skips during the book, before the half way mark is done we have lurched forward about 15 years in time, long enough for Fitz’s new daughter to be born and for her to grow up enough that… We get a new point of view character. It almost feels like heresy to say it, but Fool’s Assassin gives us Bee as a new point of view to run alongside Fitz. It was a little jarring at first, and that was partly because it felt a little wrong… almost like cheating on Fitz somehow. But I read on, and it didn’t take long before I warmed to Bee. Her chapters run as an interesting counterpoint to Fitz’s in many ways and even shed his actions in a new perspective. To have rode along inside Fitz’s head for so long, to suddenly see him through the eyes of his infant daughter instead, was quite eye opening; especially as we’re seeing through the eyes of someone who is new to the world and has a relatively poor understanding of it.

There is less of the usual supporting cast in this one, but they’re still around, popping up from time to time, but so much of the book is very insular. Not only is it set inside a single building, but it’s very limited in scope. As with any Fitz book, a lot of the pages are dedicated to seeing how he copes with emotion, be it love or loss, anger or joy, fear or anxiety. But because the book has nowhere to go, no quest to propel our main character along, we get the full force of him agonising over his feelings. It slows the book down. But I didn’t really mind. It is a slow paced book, but at no point did I find myself putting it down in frustration. In fact the only time I put the book down for any reason other than time constraints was due to Fitz’ trauma. Hobb remains the only author to ever make me cry at a book, and though she didn’t quite manage it with this one, I did put the book down and it took me a couple of days to pick it up again.

So here’s the conclusion. I really want to give this book 5 stars. I loved it. But it is slow. The first third of the book is pretty much just reminiscing and catching up with Fitz, and the plot doesn’t really feel like it kicks in until the last 100 pages. I loved it, but I also wished it would go somewhere a bit sooner than it did. So I’m giving it 4 stars, though it’s really more like 4.5. Regardless, I have the next book lined up and ready to go and I am chomping at the bit, and also dreading what might happen to the characters I love so dearly.