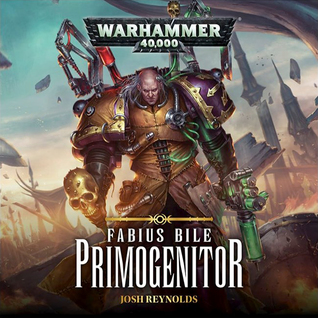 This book is my very first foray into the literary world of the 40k universe. I’ve played a bit of tabletop in my youth, and enjoyed both the Spacehulk, and Dawn of War video games, but I’ve never stepped into the literature because… well, I expected it to be trash. Part of this is baseless assumption, and part of it is I’ve been burned before (the Resident Evil tie in novels were not good… at all). But a friend recommended this book to me so I thought why not. And I’m glad I gave it a try.

It’s worth pointing out that this book is told from the perspective of the ‘bad guys’. They worship the chaos gods, the enjoy pain and suffering (both given and received), and the plot revolves around them attacking a space city because… well let’s just say the reasons aren’t particularly wholesome. But the other thing that needs pointing out is that there are no ‘good guys’, in fact part of the thing about the 40k universe is that it’s full of bad. I don’t know a lot about the lore, but the ‘good guys’ are often thought of as the Space Marines… who worship an immortal emperor who is kept alive by consuming a million souls a day (or something along those lines). When the ‘good guys’ worship an intergalactic space vampire overlord, you can be pretty sure the lines of morality will be fluid.

But onto the book. It’s twisted, convoluted, brutal, fast paced, nihilistic, and ultimately futile. Which fits the 40k universe pretty well from what I know of it. But damn, it’s also a lot of fun. The main cast of characters are constantly sniping at each other, which strangely made them quite endearing, and you get a good feeling that they are nigh on indestructible… but also quite destructible. There’s a lot of tension as they jet set their way around the galaxy, and venture into the void space where demons and worse things reside.

There’s a lot of lore, and it is occasionally delivered a little dryly, but mostly it fits well into the narrative of the story, and provides tantaslising insight into the complexities of the universe. One thing this book really made me want to do, is learn more about the deeper lore behind the scenes… and also play 40k again. I’ve actually reinstalled Dawn of War for just that reason.

The narrator does an excellent job for the most part, delivering with a practiced nuance, and bringing the characters and their world to life. My only criticism of him is that he used very similar voices for some of the characters, and because of this occasionally lost track of voices when they were all conversing.

So I’m giving it a 4 out of 5. A very enjoyable, fast paced read. I’ll probably check out some more 40k novels in the future.