Agonised about how to rate this one. On the one hand it’s Deus Ex! The gameplay and mechanics are still in tact and Adam (Batman) Jensen is still as awesome and droll as ever. On the other hand it has some MAJOR flaws.

For anyone who doesn’t know, DE: Mankind Divided (MD) is the follow up to the hugely successful 2011 game DE: Human Revolution (HR). It’s a cyberpunk stealth/action thriller which sees our protagonist, Adam Jensen, as the most badass cyborg alive. He stealths or shoots his way through the story to uncover the truth behind the big bad corporations that control the world.

So HR was an amazing game. I put it as my favourite of 2011 (even pipping the juggernaut that is Skyrim) and gave it a 4.5. It only missed out on the final 0.5 because of the infuriating and lack lustre boss fights. I mention this because it shows how big a stick MD had to live up to.

The gameplay in MD is very much the same as it was in HR and I’m all sorts of OK with this. It ain’t broke so please don’t go trying to fix it. There are more augments that you can unlock and a whole host of fancy new tricks that come along with them… none of which did I use. Honestly I played through the entire game with cloaking, hacking, smart vision, and both long and short range non-lethal guns. I may have to play through it again to play with the new gadgets. But this just proves my point, the gameplay is the same as the first game and that’s a good thing. The DE series is, in my eyes, the best stealth-em-up game on the market today. It’s fun, challenging, and varied and there are usually multiple solutions to each problem. I can’t really attest to how well the run-and-gun style of gameplay holds up because that’s just not how I roll. Adam Jensen is a stealthy ninja cyborg Batman and that’s all there is to it. 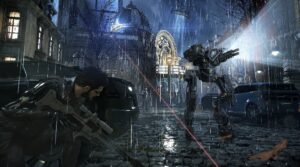 There are choices to make and I’m not just talking about the obvious times when you have 2 missions and enough time to complete only the 1 of them. The actions you take during missions can have knock on effects. One mission had me breaking into a secure train station to steal a thing and I triggered an alarm along the way, no sooner was I back at HQ I was being chewed up by the boss for causing a ruckus. Another mission had me trying to abduct a leader of a cult in a hostile city, I navigated my way to the dood in charge without killing a single soul (actually I managed the entire game without a single death to my name) and the leader recognised this. They are small decisions you make but they matter and that gives the world a more real, lived in feel.

Onto the world and setting. I love the world DE gives us. I love the cyberpunk feel where giant corporations exist and control everything. I love the idea of gangs taking over entire sections of cities. The idea that after years of research augments (cybernetic implants) aren’t just for those who have lost a limb or the like, but people purposefully get these augments installed to be more than human. 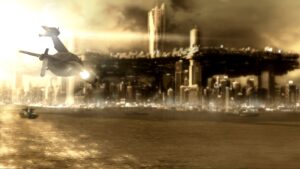 Hengsha, a city so crowded they had to build a second city on top of the first.

In MD the golden age of augments has passed and the world has moved onto a much darker time. People with augments are feared and segregated, treated as second class citizens and stripped of basic human rights. It’s forced down our throats a bit but that’s not necessarily a bad thing. Shit like this has actually happened in the real world, is still happening in bits of it, and sometimes we need a very graphic reminder of this to convince us that it really did/does happen and it’s not OK. I mention this because I know a few people who got a bit pissed off at how often the prejudicial theme was brought front and centre, but personally I thought it was core to the very story that is being told and deserves to be there in front of us the entire time we are playing. This isn’t something we should ignore or forget because history has a habit of repeating itself and that’s simply not something we can allow in this case. 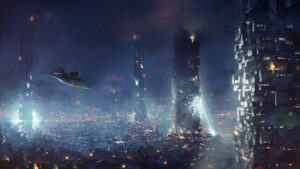 The visuals are still simply stunning.

The soundtrack! You might think it odd that I mention this, I don’t usually, but there’s a reason. HR had an amazing soundtrack, so much so I purchased it. The music was perfect for the setting and hit all the right notes. MD has a decent soundtrack by way of comparison, but it lacks the same impact. It is there, but it does not stand out.

So the one thing that MD does heads and shoulders better than HR is the boss fights… or lack thereof. In HR there were 4 boss fights and all had just 1 solution: kill the bad guy in a big shoot out. In a game that sold itself on being able to navigate it by stealth without killing (if you so choose) this was a big red cross. It sucked. MD has 1 boss fight right at the end… at least it did the way I completed it. It’s still a bit of an arena fight, but you don’t have to go all shooty shooty. I did not, I beat the bad guy unconscious and handed him over to the authorities like the good little pacifist I am.

Right, so how does MD earn its lack of rating. Why do I give it a 3 out of 5. Well there’s 2 reasons and they’re both linked. First is that the game is short. I spent about 20 hours on the main story (including many of the side quests) and that’s with a bit of reloading when shit went sideways and about an hour on pause because a family member phoned me. In reality, I would say there is about 15 hours of gameplay at best. Now I didn’t find and do everything, but I did a fair amount. The game is short and that’s a fact, especially when compared to its predecessor.

The second reason is this. MD suffers very heavily from middle syndrome. This is a thing! In terms of a trilogy the first story (book/film/game) is usually a good scene setter and a full story all itself, the second often feels like it isn’t a full story but only half a tale, setting up things for the final instalment. MD is this second story. I’ve heard it described as it ends on the second act and it’s true, it does.

I was fighting the big boss and I took him down, knocked him unconscious and celebrated with a sip of rum. My girlfriend, who was watching, turned to me and asked if that was it. I said “No. Just beaten this bastard.”… then the credits rolled. 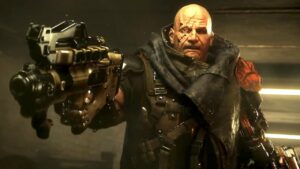 This dood is a lackey. He screams “lackey”.

I was actually shocked because that wasn’t a full story at all. The guy I’d just beaten was nothing more than a lackey for the shadowy higher ups and I knew that. Adam Jensen knew that. At this point, everyone in the story knew that. I felt cheated. I still feel a bit cheated because it only feels like half a game, half a story. There are SO MANY threads that are left completely open and unexplained. As far as a story goes it was disappointing, not because of its content, but because its lack of resolution.

One other minor gripe is that I would have liked to see a few more of the supporting cast from HR in the mix. The new cast is fine, though a bit bland, but I missed the antagonistic self-important of Pritchard. Even the pilot was a bit 1 dimensional when compared to Malik from HR.

All in all Deus Ex: Mankind Divided gets a 3 out of 5. Gameplay and setting are fantastic, but the story and size are a severe failing. What does this mean? Well I’ll still pick up the 3rd game in the series, but I won’t be going anywhere near the DLC.