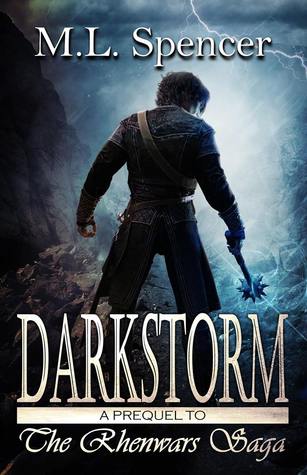 Time for a little disclaimer. It is, unfortunately, impossible to really separate the narrator from the words when reviewing an audiobook. But I have tried.

Darkstorm is a prequel of sorts to M L Spencer’s Rhenwars Saga. The author told me this when I started the book, and pointed out that it’s probably not the best place to start the series. However, I was after an audiobook, and book 1 was not yet ready (I believe it will be soon and is probably a better place to begin your journey into the Rhen). She was not wrong. There are points where I found myself a bit lost and confused, and I feel if I had a broader knowledge of the world, it would have all made a bit more sense.

Right, so Darkstorm is the story of 2 brothers, Braden and Quin Reis as they struggle to stop a corruption within their order of mages from opening up a portal to hell. Yup, that pretty much sums up the plot in a single sentence. It’s a mad ride!

The story is fast paced and frantic, with a few big twists along the way, and a hell ( 😉 ) of a lot at stake. I mean, let’s be fair, the stakes rarely get higher than ‘the world’.

So normally I’d have given this book 4 stars (just keep reading). It’s fun and dark, sword and sorcery, short and very enjoyable. BUT! I am a picky audiobook consumer. Narrators can make or break a book. Some really bring the characters to life, and others… Well, I’ll just point out here that I did NOT get on with the narrator. He made everything sound like a breathy whisper, and I don’t think he captured the tone of the story at all. Honestly, he made the book sound like a romance novel rather than a fantasy.

So I’m giving Darkstorm 3.5 stars (yes, I’m knocking off 0.5 of a star for the narrator), but as always, I round up. So technically it still gets a 4 stars from me. I think I’ll pick up the next book in written format.