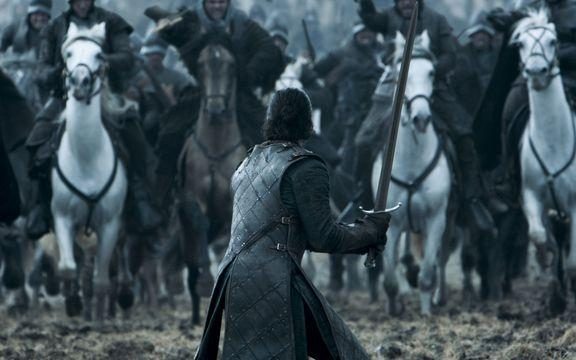 Game of Thrones: Bastard vs Bastard

So everyone is talking about the latest Game of Thrones episode and saying things like:

“There’s something broken inside you if this isn’t a top three episode.” – Adrian “High Heels” Collins.

Nah, I’m still gonna do it. 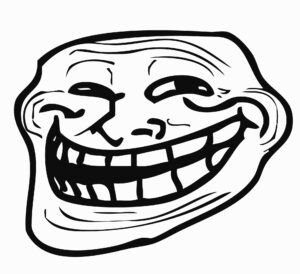 Let’s start with the beginning and Dany’s continual cultural genocide. Some of you will probably know by now just how much I hate Danaerys Stormborne. She’s a bully and a murderer with no respect for people or their cultures. Now I’m not saying slavery or degradation of women is right (because it isn’t), but neither is straight up murdering folk who have a different world view than you. Religion might not enter into it, but Dany is basically reliving the Crusades… only with dragons.

That being said… I liked a couple of things about Dany’s little storyline this week. First off was she actually listened to one of her advisers… I’m gonna take a moment. It’s needed.

Dany has made a habit throughout the story (both books and TV) of ignoring pretty much anything and everything her advisers have to say. Her subsequent decisions usually lead to bad things and lots of death. Here we see her listen to Tyrion of house Wine and… well… there’s still a little bit of death but overall not much. Hats off to her for finally taking her head out of arse.

Perhaps this is the start of a new Dany. Probably not. She’ll just sail away now and we’ll pretend Mereen and all the other cities are fine. No more problems there. All hail the glorious… Is she gone? Across the ocean, you say? Back to slaving it is.

I did like the scene of the dragons finally pulling their weight (though I’m wondering about her telepathic(?) ability to communicate with them). It was a bit like: Ahh, bless. They brought little wooden boats to a dragon fight. And they knew she had dragons… they didn’t think this siege through, did they?

Oh, and what about that horde of 1 million Dothraki charging into the city? Let’s just pretend that goes without incident…

Enough about Dany. No wait. One more thing. What was with that scene with her and Asha? (I don’t care if you want to call her Yara. You’re wrong.) They might as well have just kept winking at each other and licking their lips. It played out like a scene from a Carry On movie.

Lets ignore Jon’s awesome expression for a moment and concentrate on the straightness of Sansa’s back! Built to Queen!

I liked the build up. The scene of Jon and Sansa arguing to set up the dramatic twist later on. The Onion Knight and Giant’s Bane having a bit of a chat. Davos finding the site of the pyre was a bit eye-rolling.

I’m gonna call a spade a spade here. Jonny boy deserved to lose the fight. He should have lost the battle. That whole bit with Rickon was a joke and someone should really have told the boy to zig and most certainly zag. Dumbass! It kinda felt like the Martells (don’t get me started), in that the TV show folk had no idea what to do with Rickon so they just murderised him. And then Jon got angry and committed suicide… or at least he really should have. There was no way his cavalry were catching up to him in time. 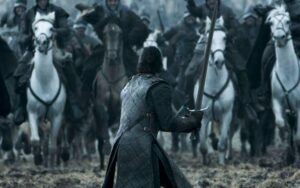 Then came the drunken stumble through a green screen. Maybe not, maybe it was filmed in location. SO MUCH CGI. Hey, it looked quite impressive with all the horses smashing into each other and everything. Fun. But SO MUCH CGI.

Taking a break for a pet peeve. I honestly get angry with how easy TV folk seem to think it is to chop a head off. Just… no!

So the battle was good actually. Lots of over the top gore and a couple of “Bro! You found me in all the chaos!” moments, but for the most part it did feel like chaos and I liked that.

BUT. What the fuck was with the piles of bodies? They were very neatly stacked in a sort of barrier to hem the good guys in. This just made me laugh. It was utter bullshit designed to create a specific set piece.

Then the wall of infantry happened and… I think Jon’s boys need to learn how to properly utilise a giant. Give the bastard a club, a tree. Something to swing and break the enemy lines. ALSO, he’s a thirty feet tall slab of brutish muscles and none of Bolton’s boys broke and ran. I’ve played Warhammer. Terror checks are an arse and once one man turns tail and flees, others soon join in. Jon needs to learn to giant better…. which probably won’t happen now because there aren’t any more of them. 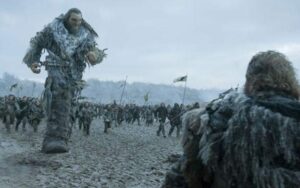 There is no way that wouldn’t thing coming at you wouldn’t cause spontaneous defecation.

So Littlefinger ex machina happens and saves the day and… well done, I guess. What a terrible end to a dramatic build up and a good battle scene to boot. Just a whole heap of meh right at the end. 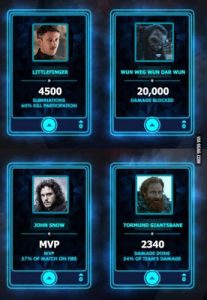 For all the Overwatch players. I love this so much!

Not much more to say other than the Bastard’s end. So Jon Snow is probably fairly built, I reckon he’s got a bit of strength to him, probably knows how to swing a punch. Ramsay is down, head on the ground and… he takes about twenty punches to the face maybe. I think they might be underestimating the sort of damage twenty unprotected punches to the face can do. Bit of blood will do it? Sure. Why not?

Then we have feeding time with the dogs. I’m a little torn with this bit. I’d have liked to see a little bit of a ghost of who Sansa used to be. No matter what the man had done, she still watched a dood torn apart and eaten. I think she probably could have thrown up at the sight. I probably would have. Then she could have walked away with that little smile at the corner of her mouth and fuck yeah! 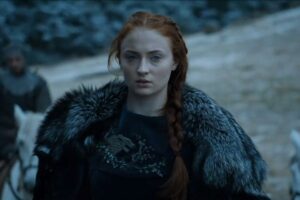