Confession time again, heathens. Another fantasy author has stepped up and offered themselves on the altar of sin. Richard Nell, author of Kings of Paradise, is here to be judged.

Richard Nell concerned family and friends by quitting his real job in 2014 to ‘write full-time’. He is a Canadian author of fantasy, living in one of the flattest, coldest places on earth with his begrudging wife, who makes sure he eats.

His debut novel, Kings of Paradise, is the first of an epic, coming-of-age, low fantasy trilogy, and a Canadian Amazon best-seller in dark fantasy. It’s available now.

He also writes flintlock fantasy! Join his mailing list for news on finished work, freebies, and the occasional philosophical rant. 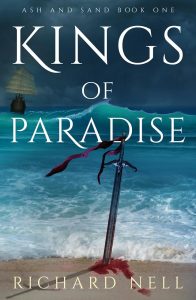 An island prince searches for meaning; a deformed genius struggles to survive. In a changing world where ash meets paradise, only one man can be king…

Ruka, son of Beyla, is a monster. Single-born, twisted, and ugly, Ruka has the bright, golden eyes of a wolf. But his mind is as vast as the open sea.

Born in the frozen, snow-covered wasteland of the Ascom—the land of ash—Ruka was spared from death at birth by his mother’s love. Now, he is an outlaw, and dreams only of vengeance. But can a broken genius find redemption? Can he fulfill his mother’s dreams, and use his gifts to change the world? Or once he has it in his grasp, will he simply break it apart?

Across a vast sea is the white-sand island paradise of Sri Kon.

There, Ratama Kale Alaku is fourth and youngest son of the island monarch men call the Sorcerer King. At sixteen, Kale is a disappointment. His father has sent him away to the navy, perhaps in hopes of salvaging a once-promising child, or perhaps just to get rid of him.

Now Kale must prove his worth – not just to his father, but to himself. He must become more than just a wastrel prince, and quickly, or else lose all hope of purpose, or love.

And though Kale does not yet know how or why, he stands on the cusp of discovery. For his path, his ‘Way’, is perhaps the only hope for his family, his people, and as the storm gathers in the land of ash, maybe the world itself…