Hello again, sinners and heretics. This week I have guest author M.L. Spencer stepping into the confessions booth to beg forgiveness from you all. And as an added bonus, her books are currently on sale, so go buy some!

These are my confessions. Forgive me, audience! 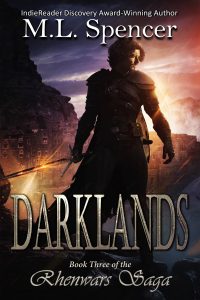 M.L. Spencer was born in Southern California and grew up on the works of Steven R. Donaldson, Stephen King and Frank Herbert. She wrote her first novel-length manuscript at thirteen.

By day she works as a biology teacher; by night she sweats over a beaten-up keyboard. Her novel Darkmage won the Indie-Reader Discovery Award for Fantasy.