Confession times again, children, so gather round and listen to C.T. Phipps, author of Agent G: Infiltrator, as he unloads the burdens of his authory soul. How do we judge this heretic? Is he forgiven? Or damned?

C.T Phipps is a lifelong student of horror, science fiction, and fantasy. An avid tabletop gamer, he discovered this passion led him to write and turned him into a lifelong geek. He is a regular blogger on “The United Federation of Charles” . He’s the author of The Supervillainy Saga, Cthulhu Armageddon, Straight Outta Fangton, and Esoterrorism. 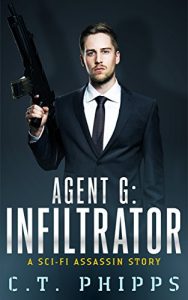 “Black Technology has made murder a billion dollar industry.”

The International Refugee Society has twenty-six cybernetically enhanced “Letters,” and for the right price, they’ll eliminate anyone. They’ve given up their families and their memories for ten years of service with the promise of a life of luxury awaiting them.

Agent G is one of these “Letters,” but clues to his past are starting to emerge while he’s on a dangerous mission to infiltrate the Society’s most dangerous competitor. In the midst of all the violence, subterfuge, and deceit, he’ll need to keep his wits about him and trust sparingly.

After all if an organization will kill for money, what would they do to keep the truth hidden?