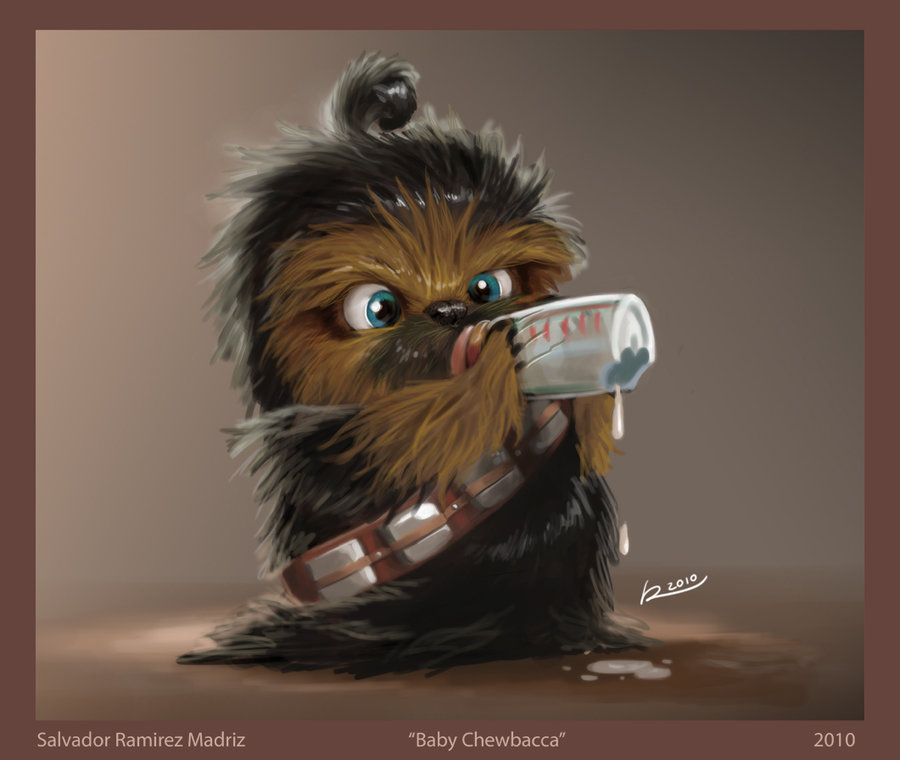 Chewbacca is the Real Hero of Star Wars The Force Awakens 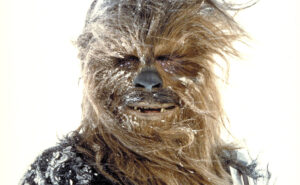 This post will contain spoilers for Star Wars Episode 7 The Force Awakens (TFA).

By now we’ve probably all seen some of these memes going about. Here’s one below… right in the feels.

Right in the feels!

It got me thinking and I’m thinking this: Chewbacca is the real hero. That big Wookiee badass is everywhere in TFA. He delivers both funny and heartfelt one-lines and does it while speaking a completely foreign language that (I would assume) at least most of the audience can’t understand. I’m guessing there’s folk somewhere who have learned to speak Wookiee.

Lets just go through a list of his accomplishments in TFA.

Pretty much EVERYTIME someone needs saving in TFA, from the moment Chewie is introduced, he is there to do just that. Hero!

Back on the cargo ship when shit breaks loose and Han needs to open a door, Chewie takes a blaster shot for his best friend while covering Han’s old, wrinkled ass. He shrugs it off pretty handily after a piss-poor job of bandaging. Seriously, most folk die from a blaster shot, Chewie requires a plaster. Hero!

He gets left behind to looks after the Falcon while Han, Rey, and Finn go to the bar. Does he complain about being left behind? No. Do any of them offer to bring him back a drink? No. He lets it go. Then when shit starts kicking off and the First Order shows up, Chewie runs right the hell into the thick of it to help out. That’s pretty much the definition of a Hero!

Despite the fact that he has no other weapon and Han is already packing a blaster, Chewie readily lends his Bowcaster to Han, leaving him fairly defenceless in a fire fight. He actually does this twice and never complains. Why? Because he puts his friends well-being ahead of his own. Hero!

With minimal planning from the group (by the looks of it Finn just says he has a plan and rushes off, hoping the others will know their parts), Chewie moves with more stealth than Solid Snake and captures the biggest badass the First Order Stormtrooper division has, Captain Phasma. This girl is so hardcore she runs around with shiny armour… in a battlefield situation that is called painting a target on yourself. And Chewie captures her, easily… barely a fight. Then Finn pretty much takes the credit for the whole thing while Chewie sits back and lets him gloat. No big deal. Just another day for the galaxy’s most heroic Wookiee. Hero! 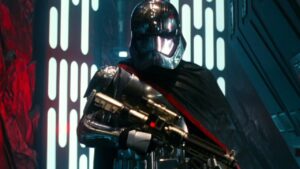 On their way back out into the freezing temperatures outside, Chewie (despite being cold himself), picks up Han’s jacket and hands it to him, reminding him to dress against the chill. Selfless. Hero!

Here’s the feels one right here. Chewie watches his best friend and heterosexual life partner try to mend bridges with his nephew (we all know he was uncle Chewie to little Ben Solo). He doesn’t get involved. He watches, hoping it all works out. Then Han is betrayed and stabbed through the chest with a lightsaber before being thrown into an abyss… Chewie lets out a scream and activates HERO MODE. He takes a well-aimed shot and injures Kylo Ren (not even Chewie has it in him to murder his own nephew), a calculated move which will give them all time to escape… hopefully. He then dodges a hail of blaster fire and takes out a unit of Stormtroopers before blowing the charges (allowing Poe Damoren to detonate Star Killer Base and take all the credit), and manages to escape. HERO!

Then, holding in emotions that would cripple most people, Chewie treks ALL the way back to the Falcon (this is not a short trek either and it’s through freezing snow). Does Chewie run? Fly away? Not a chance. Despite the planet blowing up around him with the force of a supernova, Chewie flies the Falcon and manages to find his new friends lost and injured in a frozen forest. He then lands the Falcon long enough to go and fetch the injured friend, AND THEN flies them all the hell out of there before the planet explodes. Hero! 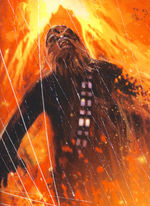 You may think he’s on fire, but no! That’s Chewie going Supersayain

Lastly, and I will point out again that this is despite the fact that his best friend and life partner has just been murdered. At this point Chewie would be forgiven if he faded away into a bar and drank the rest of the trilogy away. But no. Chewie is too much of a hero for that. This giant walking carpet is the Jack Bauer of the Star Wars universe, always in the fight no matter how much of a shit storm is going around in his head and heart. Lastly, when one of his new friends sets off to find the long-lost Luke Skywalker… Chewie is the first to sing up on that mission and even takes her on the Falcon. Hero!

So that’s it. There’s been a lot of shit on the internet about how Rey isn’t featured in as much merchandise as she should be. How she doesn’t have a Monopoly figure and how her action figure is sold out due to inadequate supplies…. But the real hero of The Force Awakens is Chewbacca and he doesn’t have a monopoly figure… his action figure is under-supplied AND under-demanded. Do you hear him complain? Of course not. He’s Chewbacca. He’s a Hero! 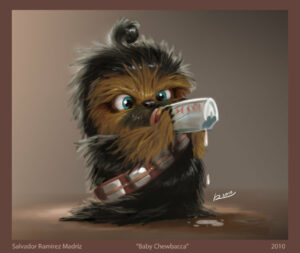 Heroes can also be cute. In this case too cute not to share