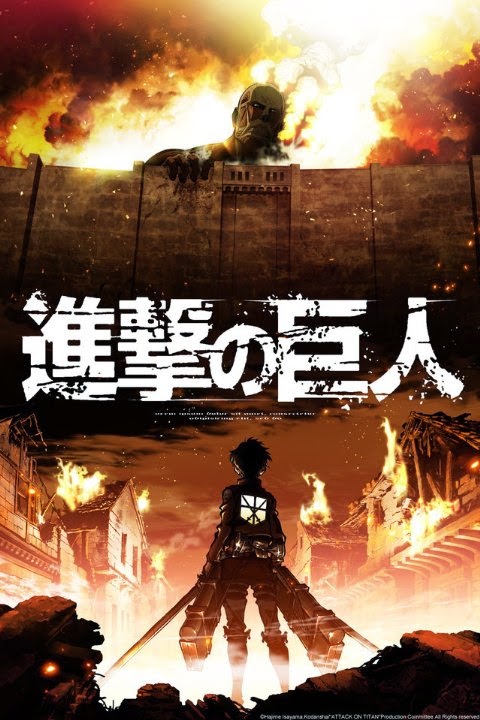 OK, I feel I need to go on a bit of a rant here. Almost everyone I know goes all dewy-eyed and moist at the mere mention of Attack on Titan (AoT), whereas I get infuriated. I feel you all need to know why so you can tell me how I’m wrong.

I’ll start with a broad statement designed to raise the ire of my opposition. Attack on Titan was shit. 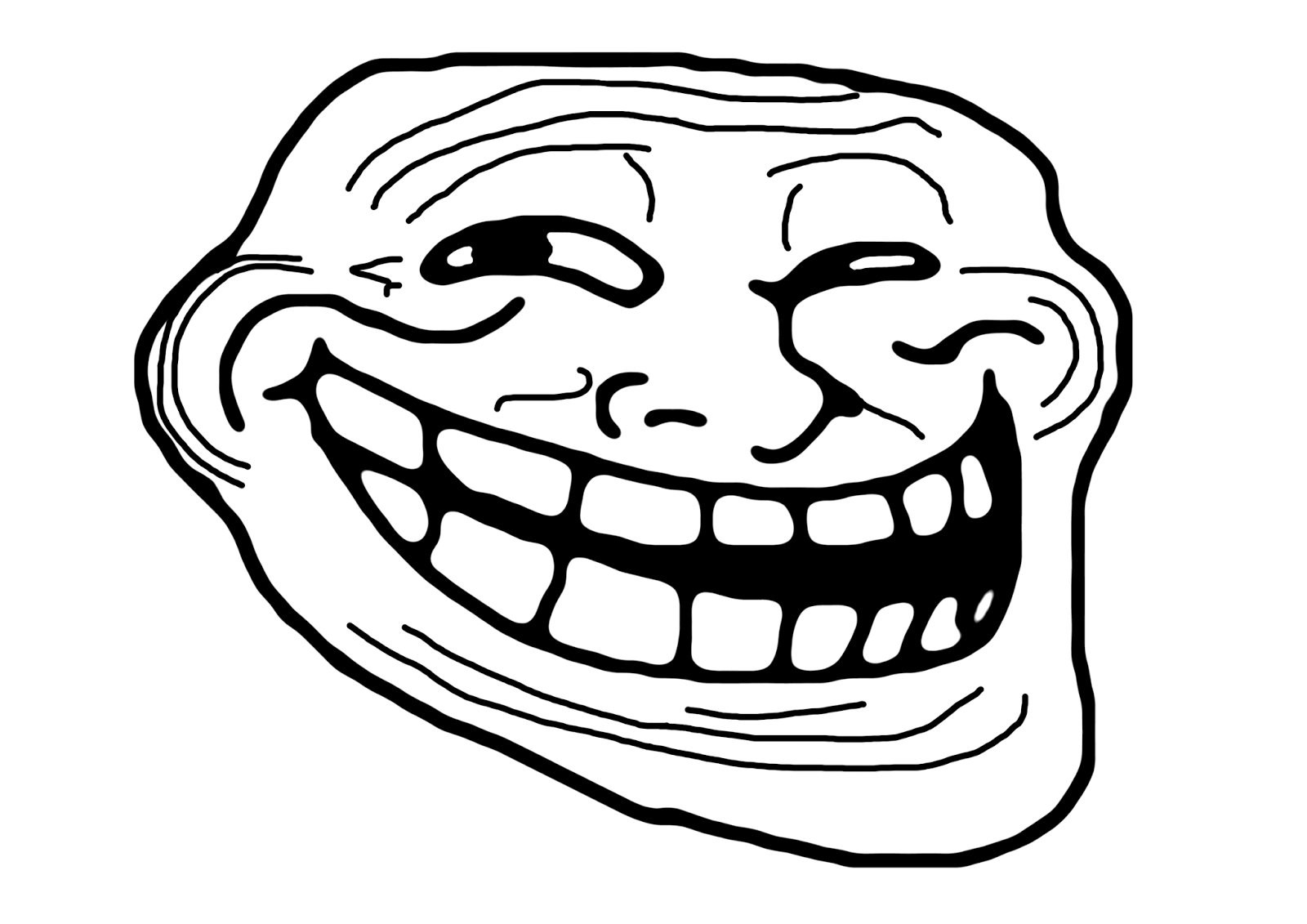 Now I’ve got you all good and steamed up I’ll confuse you a little by saying some good things about it. The hook is brilliant. I watched all 25 episodes of season 1 of AoT and the only thing that kept me coming back (besides my own dogged perseverance) was the mystery of what the Titans actually were? Where they came from? And what was their agenda? None of those questions were answered by the end of season 1 and that left me with a bitter taste in my mouth because I really don’t want to have to sit through a season 2.

The pacing was good. Stop. The pacing was good for the first 13 episodes. The story zips along with some twists and turns (not many but enough to count as a small chicane) and then it stops. Episodes 14-25 are a SLOG but I’ll get to this in a moment.

I’ve run out of good things… honestly that’s all I’ve got. It’s not a big list is it? On to the bad!

The characters in AoT are awful. Let’s start with the main character, Eren Jaeger (given that he turns into a Titan himself I’m forced to wonder if this is a little nod to Pacific Rim… if so then I’ll put that in the good column because… well… Pacific Rim!). Now I like to refer to Eren as Shouty McShoutsAtEVERYTHING because that does seem to be his primary mode of communication. He shouts at his parents, he shouts at his friends, he shouts at his enemies, he shouts as his superiors, he even shouts at himself. Hell, he even shouts in his internal monologues. Honestly I get he’s supposed to be passionate but you can get across passion without raising your voice. He feels a little like Steve Carrel’s character in Anchorman.

But Shouty is also something else. Shouty is also bland. He looks like every other anime teenager protagonist. He has no discernible character traits other than being angry all the time and wanting to kill ALL the Titans. I get that they’re basically man-eating giants but surely they count as a separate species? I find it hard to get behind a characters whose main driving force is committing genocide.

I could go on but I’d like to get around to a couple of other characters. Next we have Mikasa Ackerman, Eren’s adopted sister, and all round death dealing machine. Now Mikasa started off as interesting, sure she had the cliched silent, stoic femme fatal thing going on, but I could get past it because honestly she seemed like a much deeper character than Eren and she didn’t go around screaming at everything. There was even a point (a couple of episodes) where it looked like she was set to be the main character and the whole following Eren Jaeger around thing was a ruse set down to build Mikasa’s character. At this point I was ready to get behind the series in a big way… then Eren resurrected as a Titan and Mikasa went back to following him around making dewy eyes at him and being a bit wet. She never really moved past that point unfortunately.

The last of the three notable characters is Quatre Raberba Winnersorry I meant Armin Arlert (this will likely not be my only Gundam Wing reference). Armin is short, blond, a bit of a wuss, slightly effeminate, mentally unstable, and a strategic genius. He is actually a cut and paste model of Quatre and there is really very little else to say. 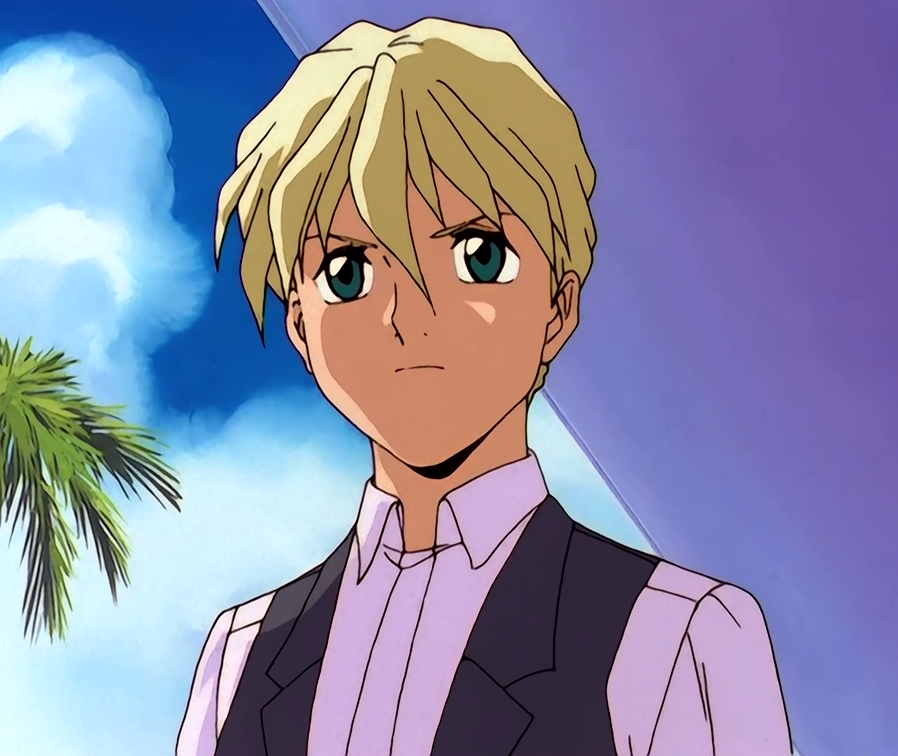 Moving on to a bit of the pacing of the second half of season 1. It’s atrocious. Honestly there are episodes where nothing happens. I haven’t seen pacing in anime this poor since I last watched a Naruto filler episode where they spent 10 mins recapping the last episode (where nothing happened) and then 10 mins of telling us what they’re going to do in the next episode (pretty much nothing again).

The poor pacing culminated for me in episode 19 when we saw Eren astride a horse, with his hand in his mouth like a naughty child who was clearly about to do something despite being told not to. Then every one of the red shirts in his squad spent 5 minutes droning on about how Eren should trust them (yes, Eren spends this entire time with his hand in his mouth about to bite down to turn himself into a Titan). Predictably each and every one of those red shirts dies in the next episode. Oh well, hard to get attached to a character when all they are is a hair style. 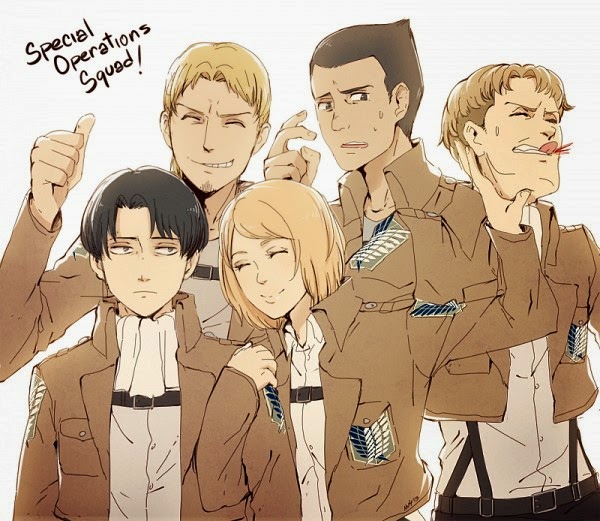 Special Operations Squad: Personalities are interchangeable but hairstyles are not!

There are other instances of poor pacing, such as an episode which literally just describes what the plan is for the next episode, but we’ll drop it there instead of droning on. The last thing I want to do is become a parody of an AoT character.

I think it’s important to touch upon a theme of AoT and that theme is: War is Hell. That’s fair and I suppose it gets across the seeing of friends killed on the battlefield in horrific ways quite well. The problem is gets bogged down by it. AoT is not the first anime to support this theme, mecha animes have been doing it for years. Gundam Wing did it brilliantly, considering the entire plot of the series was actually about war being hell, and Treize and Zechs realising that the only way to end humanity warring was to give them a war that could never be allowed to be repeated (and you all thought it was about kids in big mechs). Even Eureka 7 touched on the war being hell when Renton realised he was killing people not just big robots. The important thing to note is that neither Gundam Wing, nor Eureka 7 got bogged down in the theme and neither wallowed in it like an elephant in a pool of mud.

The other problem I find with the AoT War is Hell theme is that the characters take it SO hard when one of their comrades dies. Now I’m not trying to belittle how hard it hits when this REALLY happens but instead point out that AoT is set over 100 years after the Titans first appeared. Every character in AoT has grown up in a world where the threat of Titan attack is a real, constant possibility and yet none of them seemed prepared for it. It seems a little unrealistic to me. I’m not saying they should shrug it off like a scarf, but they join the military knowing full well what they’re up against and none of them seem to expect to lose a single comrade.

One last thing I would like to point out is simply this: To defend against the Titans, 50 metre high walls were built around an area where the last of humanity is located (that’s pretty much the premise for AoT). With a quick look at statistics I found that the area inside the walls is approximately the size of present day Germany. So, without the use of modern day equipment like cranes and heavy transport auto-mobiles, the people of this world somehow managed to construct a 50 metre high wall running approximately 480km, and then build 2 further circular walls inside of that one. 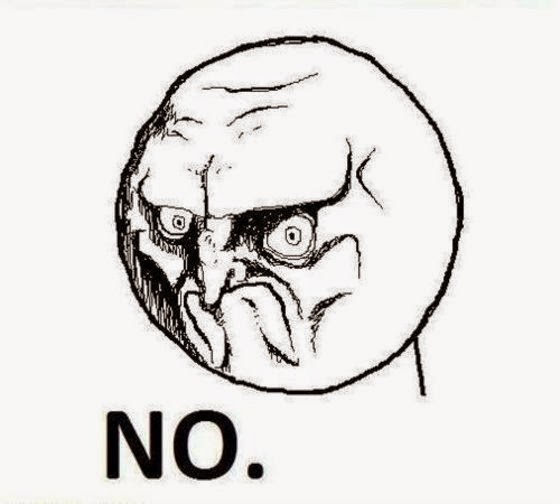 So there we have it, my honest review of Attack on Titan season 1. Does anyone agree? I welcome all comments from thoughtful retrospectives to enraged, flaming fan boys spewing hate.