5 of My Favourite Fantasy Book Covers

22nd November 2016 0 By Rob
Book covers are a big thing. They’re important and not just for making books look all purty. They serve to pull in browsers. They’re the opening words in a conversation. A cover makes you pick the book up and read the back cover, the back cover makes you check out the first page, the first page makes you shout “TAKE MY MONEY!” at the cashier.
So with that thought in mind, here’s 5 of my favourite fantasy book covers. They do not necessarily belong to my favourite fantasy books and are in no particular order. You may pick up on a theme throughout this blog.
1) Black Lung Captain by Chris Wooding

Actually I’m going to include all of the Ketty Jay covers in this one because they’re absolutely stunning. So much so I even contacted the artist, Stephan Martiniere, but my personal pockets are not nearly deep enough for a commission.

Some of you may know how highly I regard Chris Wooding and the Ketty Jay series is easily one of my favourite fantasy series I’ve ever read. Imagine a more steampunk version of Firefly with magic, demons, and some of the most compelling characters you’ll ever love and hate.

I could gush a bit longer on my love for the series but instead I’ll just recommend you all read them right now. 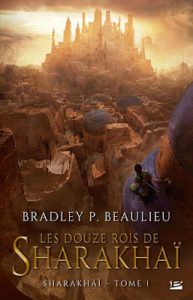 This is actually the French cover of the book and the only one I’m going to include in the list as I’m just not that impressed by the other versions of the cover. This one, however, by Marc Simonette, is simply stunning. Honestly, I have serious cover envy every time I look at this one.Twelve Kings… is an interesting fantasy tale set in a desert country (which is what attracted me in the first place). It’s fast paced with a ass-kicking female protagonist and hints at a much larger story I’m looking forward to reading. If Bradley is reading this he should definitely send me an ARC of Blood Upon the Sand (Book 2 of the Shattered Sands).

3) The Lies of Locke Lamora by Scott Lynch 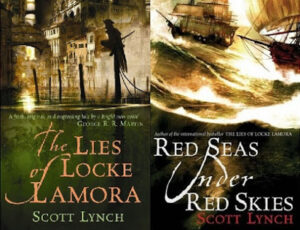 I’m going to include Red Seas Under Red Skies in this one as well as both covers are gorgeous, but this cover for The Lies of Locke Lamora is simple yet stunning. It’s evocative and mysterious. Unfortunately I can’t find a website for the artist, Benjamin Carre.The Gentlemen Bastard series is a fun set of tales about a couple of master thieves as they perform complex heists, learn to sail, and discover that there is more to the world than meets the eye… and they’re well and truly mixed up in it. It was without a doubt a bit of the inspiration behind my It Takes a Thief… series, though I went a bit lighter, fluffier, and steampunk-ier.

4) The Chronicles of the Unhewn Throne by Brian Stavely

I honestly can’t decide which of the three covers I prefer. They are all wonderful and the artist, Richard Anderson, knocked it out of the park. The style gives a detailed vague look at characters that I love.

The Chronicles of the Unhewn Throne is an epic fantasy yarn with the fate of humanity in the balance. I haven’t actually finished the series yet because I find it a bit full of fluff. Fans of Lord of the Rings and A Song of Ice and Fire will likely love it though. 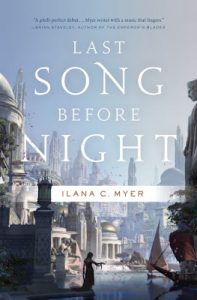 I didn’t realise this until writing this blog but it’s another cover by Stephan Martiniere and I am most certainly a fan. It’s bright and evocative and full of light and hope. From the blue of the sky to the architecture to the petals on the wind, this cover is stunning.I must admit I have not yet read the book, though it is on my TBR pile, so I can’t say what it’s about. Instead I’ll throw the blurb below.

Long ago, poets were Seers with access to powerful magic. Following a cataclysmic battle, the enchantments of Eivar were lost–now a song is only words and music, and no more. But when a dark power threatens the land, poets who thought only to gain fame for their songs face a task much greater: to restore the lost enchantments to the world. And the road to the Otherworld, where the enchantments reside, will imperil their lives and test the deepest desires of their hearts.

6) The Fifth Empire of Man by Rob J. Hayes 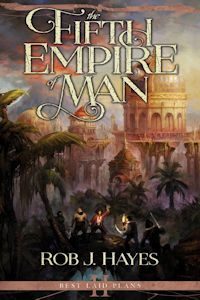 OK. I know I said 5 but I figured I could put one of my own covers down at the bottom and no one would notice… I think I got away with it. The cover is by Alex Raspad and I think it’s gorgeous. Definitely my favourite of my own covers so far.In case you weren’t aware The Fifth Empire of Man is the second book in my Best Laid Plans series and is a fantastical piratical adventure. Early readers have described it as Pirates of the Caribbean meets Joe Abercrombie.

So that’s my list of favourite fantasy covers. It’s not complete by any means but you can probably find a pattern in the types of cover I like. So which covers have caught your eyes recently? Comment below and let me know.

Rob J. Hayes is the author of the acclaimed The Ties that Bind trilogy and the upcoming Best Laid Plans duology.