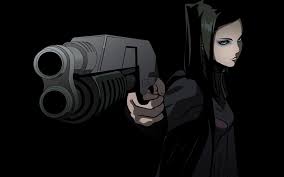 OK, I’m gonna start this one by pointing out that I have not watched every anime ever so this list will be based on those I have watched. I will however start it with a respectful mention to BESERK as I have not watched it, but am reliably informed it is GrimDark as fuck!

Onto the list. Here’s 5 GrimDark animes you really should watch:

I’m gonna start this one by saying I’ve watched this series 3 times and I’m still not entirely sure I understand what is going on 100% of the time… but damn! is it a gorgeous series.

OK, so Ergo Proxy takes place in a world where society is confined to enclosed cities and humanity is heavily monitored by robot counterparts that occasionally go insane due to a virus and FUCK SHIT UP! So our main character starts looking into this and then she finds… well basically the God of Death. Then they all go on a little road trip outside the city and shit just continues to get weirder.

So why does this count as GrimDark? Because the world is a horrible place in Ergo Proxy. Humanity has basically had its free will stripped from it by those in power and the core of the series is about said humanity waking up from enforced catatonia. 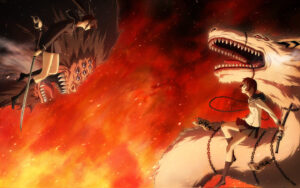 Spoiler Alert! The first episode of Ga Rei Zero makes the GRRM reaper look positively cheery. It’s pretty much “Meet your cast of major players. Now watch them all DIE!!!!” Second episode doesn’t look much better because you’re introduced to the main lass… who dies at the end of that episode (or does she?).

So after the fairly extreme opening the show goes back in time and we watch our main character build a loving relationship with a big-sister-esque character… all the while knowing that they’re eventually going to kill each other.

On a grander scale Ga Rei Zero is again set in a close-approximation of real world Japan only demons are a thing and they are also invisible to anyone without the ability to see them. And some can be controlled, but it involves a person merging their soul with the demon and that demon steadily consumes the person. It’s dark, but it’s not the darkest vision of a world. The GrimDark really comes from watching the relationship between our 2 main girls grow as they become more and more like sisters because in the end we know it ends somewhere beyond badly.

Seriously, if you watch this one do NOT get attached to any characters. Or… you know… do because it makes it more fun when they die… they will die. 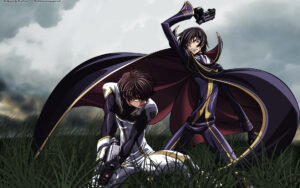 Yes, it is! It’s not about the mechs at all, alright. It’s about the fact that the entire show is about 2 best friends knowing that the only way they can stop WAR FOR ALL TIME is to give the people of the world a war SO ATROCIOUS that it can never be allowed to happen ever again. It’s also about those 2 friends knowing that to accomplish their insane goals they both need to become MONSTERS and also that they simply can’t survive it because the people of the world need to have a scapegoat for the sheer scale of death and destruction that they are going to cause in pursuit of PEACE!

So now that’s out of the way I’ll just say that this show takes place in a world where war is just… a thing basically. It’s pretty much common place and the common folk of the world are pretty much brainwashed into not only accepting this, but worshiping the bastards who are waging war. Oh, and the Japanese are basically 2nd class citizens because they lost.

We should also talk about the fact that the power our main character possesses is the power to bend people to his will… and sometimes he uses that power by accident… or does he? Honestly, the main character is pretty much a high-functioning psychopath who SPOILERS actually orders his own sister to murder a bunch of folk before killing herself. Oh, and the time he tells his best friend (love interest) to forget that he exists… yeah, he’s a dick!

Code Geass makes the list because it’s set in a horrific world where segregation and war are common place and because the main character is true product of that world.

Probably threw you all for a bit of a curveball here. You’re likely saying “Naruto isn’t Grim or Dark, let alone GrimDark. It’s about a screw up kid who actually is crazy powerful and he makes friends and has crazy adventures and…”

WRONG! Time to burst your bubble. Naruto has some of the most GrimDark shit I’ve ever witnessed in anime and instead of selling you on it I’m just going to list a bunch of them.

Naruto is about ninjas and different clans have different specialisations. One such clan has hollowed out their bodies to act as nests for insects which they then use to suck the life force out of their enemies.

Sasuke hates his older brother Itachi. Why? Because Itachi murdered their entire family. Why? Because Itachi was forced to murder their entire family in order to save Sasuke’s life. Why? Because the people in charge ordered it. Instead of explaining this to Sasuke, Itachi turns himself into the living embodiment of a villain and constantly provokes Sasuke in the hope that Sasuke will get strong enough to kill Itachi. He actually makes his own little brother kill him because… redemption, I guess.

One villain actually fights by forcing his own bones to grow out of his skin into sharpened spikes. At one point he actually creates a tree of his own bones.

Death is real. When people die, they die… unless you’re Orichimaru who is able to infect people with his spirit where upon they slowly start to be taken over by his spirit.

There’s a badguy who fights by controlling puppets made out of dead people. Two of these puppets are his own parents… who he killed specifically to make puppets out of them. Oh, and he also made a puppet out of himself.

Naruto has a demon inside of him, a crazy nine-tailed fox demon thing that was put inside of him by his own father because turning your son into a ticking-time bomb of demon energy is fun. At one point the demon inside of Naruto pretty much takes over and he exhibits so much power that his skin is burned away… but the demon heals him as his skin is burned away. So for a while Naruto is stuck in agony as the demon controls his body, melts his skin off, and heals him so it can melt his skin off some more.

Yeah, Naruto may be sold as a kids program… but DAMN! it has some of the GrimDarkiest shit in it.

Anyway, those are 5 animes you should give a try if you’re a fan of GrimDark. They’re probably not the ones you might expect either. Do you have any others you think I should try? Let me know in the comments.