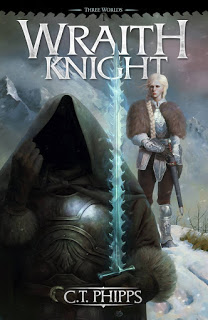 Apparently it’s customary to note that I received an ARC version of the book in return for an honest review. I also received that ARC about a year prior to release and I’m reliably informed that those pesky typos and what not have been cleaned up.

On a personal note this was one of the first ARCs I was given to read… my Kindle is now full of the damned things.

So Wraith Knight is the story of Jacob Riverson. Jacob was the greatest hero of his age and a shining light against the darkness… right up until the big bad dark lord guts him like a fish. The end. Well, not quite. Jacob wakes up a few hundred years later only to discover the big bad has been using his body (and possibly soul) as a weapon against the forces of light. In short, after being brutally cuddled to death by sharp objects, Jacob was turned into a Wraith Knight (see Ring Wraith). But the surprises aren’t quite done for poor Jay-Jay and he’s reliably informed by the big bad itself that evil kinda lost the war on purpose because the big bad was just a bit bored of being the big bad. But it’s OK, because humanity is a vile species and there’s always another war just around the corner. Oh, and the world needs evil so the big bad has volunteered Jacob for the role. No auditions necessary. And that’s pretty much where the book starts.

We follow along with Jacob and his growing (and shrinking) collection of super friends (I say this literally as everyone with a name seems to have a super power of some sort) as they attempt to right the wrongs of the world by becoming… evil.

So I described the book as “A mix between Lord of the Rings and World of Warcraft with more epic battles than a 40-man raid.” (Yes. I was there at the beginning. I killed Ragnaros and it was glorious). And there sure are epic battles. The pace of the book is so fast that every time Jacob goes anywhere, there’s someone to fight. Add into this a poorly defined magic system and you’ll soon find that anything goes in the battles. Sometimes there’s swords, sometimes there’s magic, sometimes there’s monsters. And just when you think the battle is over, the action refuses to relent and Jacob find himself thrown into more conflict.

It’s obvious from the get go that Charles has put a lot of thought into the world he’s created and there’s plenty of lore to back up the action with frequent flashbacks to Jacob’s… life (read past) and his journey takes us through much of the world so we get to discover a lot about it. He’s obviously borrowed from a lot of well established worlds in terms of monsters and other sentient races, but usually puts his own slight spin on them.

The plot is fairly straight forward (at least at first glance) and Charles does a good job of internalising the struggle Jacob faces between wanting to be good and realising that the only way to be good is to be a little bit bad… or a lot bad. Sometimes the world is so messed up it needs an iron fist… I’m fairly certain Dr Doom said that.

I have a couple of issues with the book. First off is the main character himself. I struggled to get a good sense of who Jacob was and not just because he struggles with that question throughout the book. He feels a little inconsistent at times. One moment he’s dour and resentful of the life and unlife he has led and the next he’s flirting with anything in a skirt and cracking jokes. He moves on from the love of his life with a couple of tears, despite proclaiming her to be the love of his life, because… another woman presents herself to him. It all added up to me struggling to empathise with him.

The other issue was the superfriends were a bit too superfriendly. Maybe it was an attempt by Charles to subvert a trope but the three main cast were far too quick to start swearing oaths to each other left right and center. It felt very forced. They all went from acquaintances to besties in a matter of moments.

So I give Wraith Knight a solid 3 stars. It’s a fast past action fantasy romp that sits in the lighter side of the grimdark tent.

And see, my review is pretty much spoiler free. I even got away without mentioning the big twist at the end…