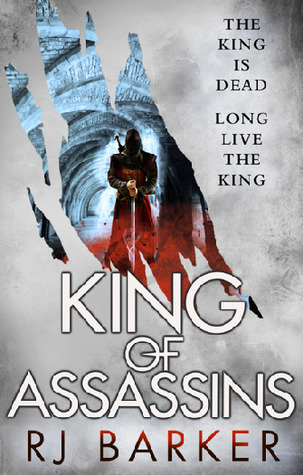 I guessed it! I guessed the big twist right near the beginning of book 2, and RJ managed to throw enough doubt on that guess that I’d reconsidered by the end of book 3 and assumed I was just seeing villains in every shadow!

I hate reviewing third books in a series. I find it hard to say things without spoilers of any of the books, and I find it just as hard to review the book rather than the series. Anyways, The Wounded Kingdom is a series that has gone from strength to strength, building upon everything the previous books laid down, and doing so in such a fluid manner that it felt real. I felt as though I knew the characters. This book took me a long time to read because I kept putting reading it off. Not because it wasn’t worth reading, but because I was scared of what might happen to the characters I had come to know and love. Because I didn’t want to see it end and say goodbye. That right there is the mark of a brilliant series!

Girton is a bit older and a lot more mature in this volume. Gone is the brash arrogance and overcompensation of book 2, and instead he possesses a quiet confidence. Gone is the blinding anger and angst and hate at the world, and instead he is contemplative and patient. It all makes for a much different experience, while remaining true enough to narrative and character that it feels natural.

The story is once again heaped with intrigue, mystery, red-herrings, and characters you both love, hate, and love to hate. It is amazing to me that the author managed to generate so much intrigue with each book and still keep it all fresh and interesting. It has never felt tired, even though each of the 3 books uses the same basic formula of mystery to be solved, Girton is on the case.

OK, I’m gushing again. I loved this book. I’ve loved all three of these books. I can’t actually think of a negative or con or whatever. This series has done something special. It has provided, time after time, a compelling mystery surrounded by vibrant characters and an emotional core that sucks you in and does not, will not, can not let you go.

5 stars and every one of them earned!

1 thought on “Review Blog – King of Assassins (The Wounded Kingdom #3) by R.J. Barker”