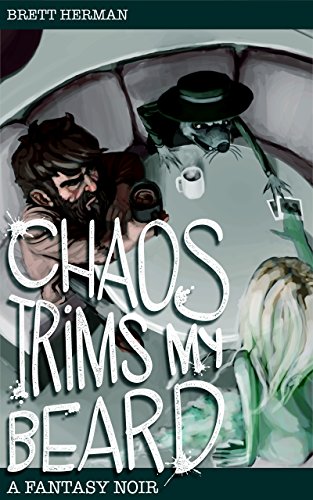 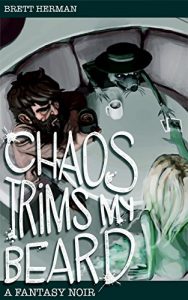 Chaos Trims My Beard has undoubtedly got one of the freshest names in fantasy fiction. Right from the outset you know you’re getting something a bit weird and quirky. This is not ‘serious’ fantasy. This is ‘fun’ fantasy. That’s not to say it’s not serious at times, or that it doesn’t deal with serious issues, but there is an undeniable undercurrent of absurd humour running through it. And for the most part it really works.

Chaos is a noir style novel told entirely in first person from the perspective of one Sandival Beardface… no, wait. That’s his alias. Edwayn Sattler. He’s a half-dwarf with a mighty beard. All dwarves are born with their beards and it’s something of a point of pride for them. He hides a variety of magical gadgets within the thick braids of his beard and deploys them with sometimes reckless abandon. After a bar-tending gig go somewhat awry, Beardface finds himself thrust into a complex plot that threatens to throw society into chaos… but more importantly, the plot threatens his life and his beard. Somewhat reluctantly, Beardface investigates the situation along with a dual pistol wielding rat-man and a dame made entirely out of air.

I’ll point this out right now. The plot is complex. It doesn’t exactly start so, but revelations come thick and fast towards the end and certainly left my head spinning. In fact I feel the revelations and the resulting motivations of the ‘bad guys’ could have used a bit of work. In a fast paced finale full of action I found myself having to re-read bits to try and figure out what it all meant. It kinda pulled me out of the excitement of it all.

The world is a trope ridden cliche of fun and wonder. There are all your basic fantasy races, and they embrace their tropes with gusto. Dwarves love their beards and their forges. Elves are poncy long-lived elitests. Orcs have a thing for axes. Chaos has no shame in playing on the tropes, but always does something a little fresh with them that make them stand out in a good way. A dwarf can never be burned by their own beard!

But the world itself is not typical fantasy. It’s more like a semi-cyberpunk future version of fantasy. The book is set in a highrise city called New Sketlin and there used to be technology in the world, but somewhere along the line it was pretty much replaced by magic. There’s fridgefreezers that run on magic, complete with tiny ball of semi-sentient elemental ice that just loves to ruin food with freezer burn. There’s televisions that run on magic. Lots of modern day tech but all with a magic lean to it. It makes learning about the world quite fun, though there are a couple of times it seems a little overdone.

Character-wise, there are some really fun characters in the book and some that just fall flat. Edwayn himself is your typical noir cliche. He’s a world-weary drunkard with a penchant for being an arsehole, but a loyal heart of gold hidden somewhere underneath it all. He’s exactly what the story needs to drive forward, but that’s about all he was to me. I really enjoyed the rat-man, Venrick the Unabashed. He had interesting speech patterns that helped bring his characters to life, there was a definite air of the gunslinger trope about him, and I love skaven. Doomwheels and Grey Seers and Jezzails… nope, I’m getting off topic here. Back to the book.

The pacing hurt the book. The narrative quite often gets bogged down with descriptions and at those times the story grinds to a halt while the world building takes over. Now the world building is interesting and fun, but it’s often delivered in such a dry fashion that makes it tedious. There were multiple points where after a few pages of reading nothing but the description of a magically enhanced skyscraper, that I was bored enough to put the book down and go in search of a cup of tea (that’s what we English folk do when bored… we make tea). Some of the descriptions were reaching a little far as well, trying too hard to be comical, and it just didn’t work at those times.

Overall I have to say Chaos Trims My Beard was a fun read full of some refreshing takes on old ideas. The rat-man’s multi-purpose guns were definitely one of my favourites. So I’m giving Chaos a solid 3 stars. It’s certainly not my usual reading fare, and it’s far from perfect, but it is beard-strokingly fun!