Confession time, my children. Gather round and judge the sinner. Today we have a new author willing to confess. Michael R. Baker has just released his debut novel, The Thousand Scars – book 1 of Counterbalance. Such a fresh new author can’t have that many sins, can he?

My confessions are great and probably a good example of what a mess I am on the good days! Here we go! When life gives you lemons, just say bugger off lemons and leave!

Michael R. Baker studied history at University of Sunderland, and at last he found a use for his degree. The idea for Counterbalance came off the back of an exhausting bus journey, ironically starting an even longer voyage into writing and publishing fantasy. Alongside his passion for storytelling and worldbuilding, Michael is an avid video gamer and cartographer, bringing his fantasy world and others from the mind onto paper reality. The Thousand Scars is Michael’s debut novel, and the first of the epic fantasy series. 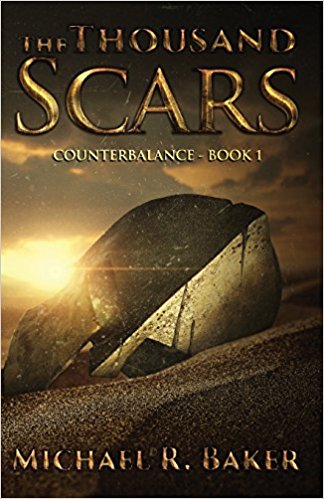 Counterbalance tells the brutal story of a land in turmoil, as two desperate superpowers battle for survival in a war of terror and clashes of morality. A complex series, it involves bloody battles and sieges, vengeful necromancers, rampant mercenary companies, a young man desperately searching for a new home, and powerful conspiracies.

For good or evil, The Thousand Scars shall bleed the world… and they will save it. Or will they? The first book of the series is out now, the opening book of this epic fantasy series.

1 thought on “Confessions of a Fantasy Author – Michael R. Baker”