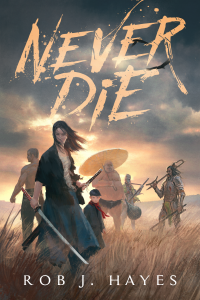 Ein is on a mission from God. A God of Death.

Time is up for the Emperor of Ten Kings and it falls to a murdered eight year old boy to render the judgement of a God. Ein knows he can’t do it alone, but the empire is rife with heroes. The only problem; in order to serve, they must first die.

Ein has four legendary heroes in mind, names from story books read to him by his father. Now he must find them and kill them, so he can bring them back to fight the Reaper’s war.

“One of self publishing’s rising stars.” – Mark Lawrence, author of Prince of Thorns

“A wonderfully fantastical and twisted take on the Seven Samurai.” – MD Presley, author of The Woven Ring

“To people that don’t read much self-published fiction, Rob J. Hayes is here to prove exactly why you should!” – Sean, BookDragon

“Rob J. Hayes has a real page turner in Never Die. A Tale of Redemption, Honor, and Death.” – Lynn, Grimmedian

“Books like this deserve to be read by all lovers of fantasy. It’s got just about everything you could ask for in the genre; and a few things you’d never think to ask.” – Filip, BookNest.eu

“Fast and FUN and you can sit down and just devour it.” – Cameron Johnston, author of The Traitor God