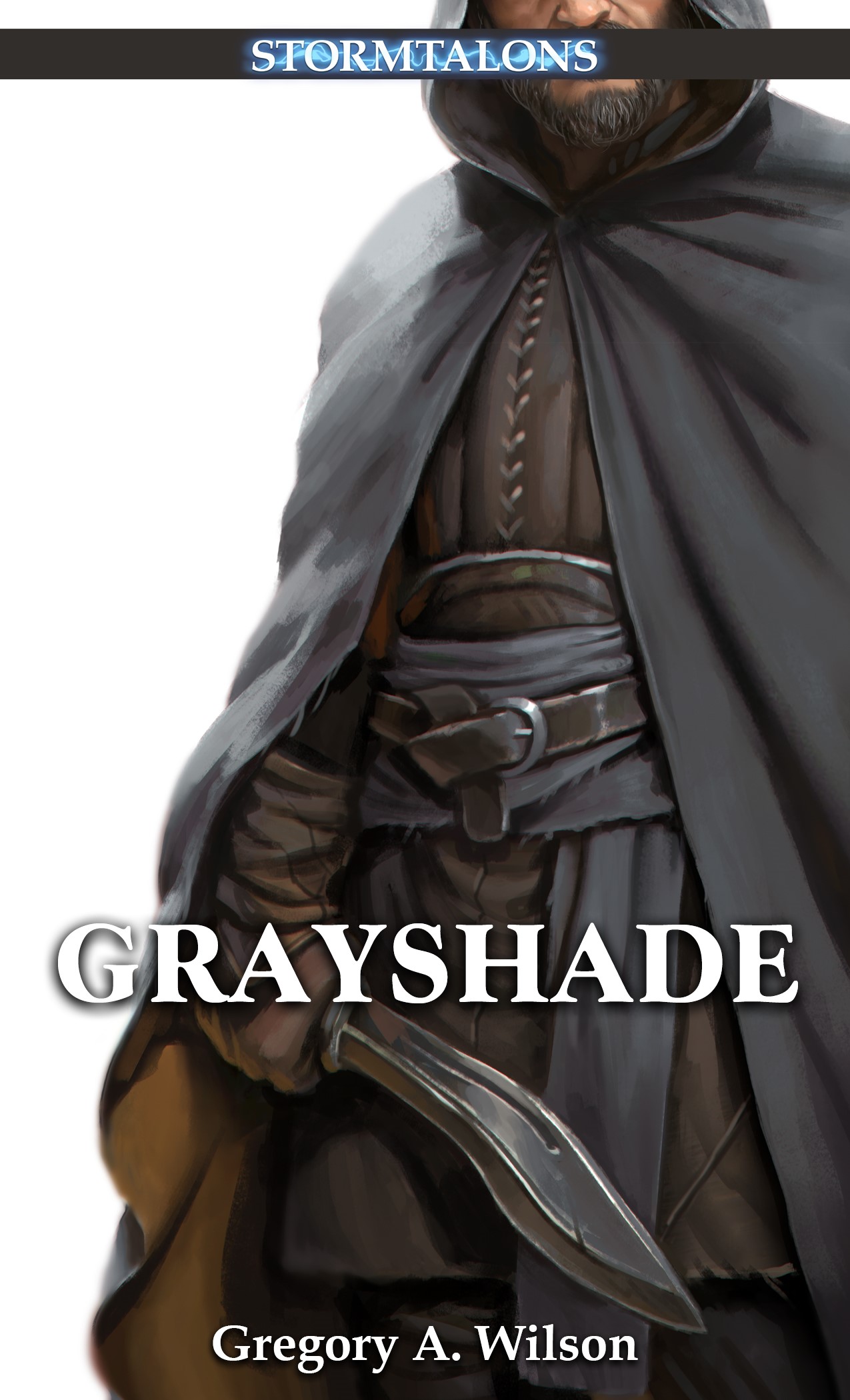 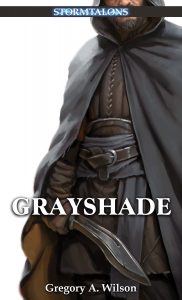 It’s worth mentioning that I received an ARC (Advanced Reader Copy) of this book in return for an honest review.

Grayshade is a book about Grayshade, an acolyte (assassin) for the Order of Argoth. We follow along in his head as he discovers the Order is not everything it claims and finds a the cause to fight for he didn’t even realise he was searching for. It’s set in the Stormtalons universe which is a shared world thing created by Ed Greenwood who also created the Forgotten Realms for D&D. Basically Mr Greenwood appears to have put the lands and cities and infrastructure into place and a bunch of other authors are playing in his sandbox and making stories out of it. I think. I went to check on the official website to make sure but it seems to be having some serious issues with links being broken and what not. Anyways, onto the book.

Grayshade is told through first person past tense… most of the time. Actually a major gripe of mine about the book was the tense occasionally slipped into present and left me scratching at my head. Our main protagonist is… actually he’s pretty bland. Grayshade has an indeterminate age, but the story definitely feels like it picks up half way through his story. A quick google tells me this books is part of a trilogy and it actually feels more like book 2 of the trilogy rather than 1. We keep getting reminisces back to Grayshade’s training that honestly sound like we’re missing out on a more interesting story than the one being told. I just never really got a feel for the character himself. Grayshade is all business and the few times he does show emotion it feels more like showing it rather than feeling it. He feels more like a plot device to tell the story than the story itself.

Now I’ve mentioned plot I’ll jump right in. The stakes in this book are so low I found myself unable to really care who won. I don’t know if this is because the author is writing in someone else’s world so can’t make major changes… but the plot boiled down to Grayshade kills a bunch of people because he doesn’t like the way a city is governed. The only relatable stake is to Grayshade’s life itself and as I was never given a reason to care about the character nor did I care about his plight.

The conflicts are almost entirely resolved by deus ex machina. Whether it’s a magical device that seems to respond to Grayshade’s will and kills without an apparent chance of blocking it (it’s about as bad as it sounds), or a young boy who suddenly awakens a new telepathic power just at the right time to save the day, or even the sudden reappearance of allies who had previously run away and gave no reason for changing their minds and coming back. After the first two times it started to remove all tension from the story because whatever peril Grayshade found himself in, I knew something would pop up just in the nick of time to save him… and it did.

One last gripe was the overly clinical explanation of everything. Whether it was continually noting how many minutes Grayshade walked down a street for, or the over description of action scenes…

I’m taking a pause right here to explain that in literature over describing scenes, especially action scenes, actually makes them more confusing rather than less because it makes the audience try to see exactly what the author was seeing as they wrote the scene. A little bit more vague is generally better as it allows the audience to engage their own imagination to fill in the blanks. Not only does it make things less confusing for the audience but it also helps them to engage with the story as they are putting some of themselves into it. Boom! Writing advice. 😉

… it made much of the book a chore to read through.

That’s a lot of negative so far… I know. It’s quite telling. So I’ll mention something positive. Late on in the book Grayshade encounters a community of human(ish) creatures calling themselves “the rats”. These rats and their culture were the best bit of the book for me (possibly because of how skaven-like they are – for all you Warhammer fans), from their almost hive-mind connection to the way they speak in past tense. Unfortunately that’s about all the positivity I have.

So Grayshade earns itself a record low for me of 1.5 stars but as always I round up so 2 stars it is.