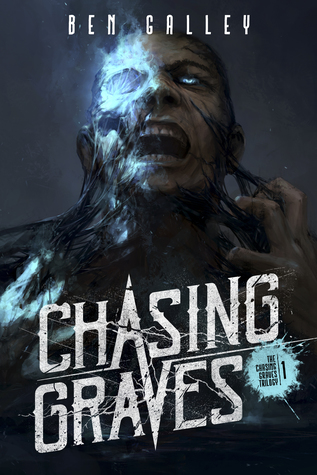 Dark, dangerous, and full of humour.

This is how I like my grimdark. Chasing Graves is a dark book, where the world is a shit place, and it only gets shittier once you die. But there is humour to offset the oppression, and glimmers of something shiny underneath all the muck.

This book is set in a world where death is only the beginning, and life is the shorter portion of a person’s existence. Ghosts rise not long after the body expires, and those ghosts can be bound into service with a coin, a little bit of ritual, and some Nyxwater. Unfortunately for these newly risen shades, they are now immortality dead, and treated, at best, as second class citizens, and, at worst, slaves. Sound like an interesting concept to you? Then stop reading my review and pick up the book. You won’t be disappointed.

This is my first Ben Galley book, but certainly won’t be my last. He has a descriptive way, laying on the similes and bringing them down to earth… only to cover them in shit and humour. It makes for an easily digestible, and thoroughly engaging style of writing.

The plot seems pretty straight forward at first. Caltro Basalt is killed in the first chapter (no spoiler, it’s right there in the book’s blurb), and is then bound as a slave and sold to the highest bidder. Much of the book follows his trials and tribulations as he comes to terms with his new half-life, and tries to find a way to garner some justice.

By far the more engaging part of the story though, for me, was Nilith. We know very little about Nilith, except that she’s killed her husband, and is determined to drag his corpse all the way across the desert to bind his ghost in the grand Nyxwell. I liked Nilith. In a world full of murderous curs and folk, both living and dead, all out for themselves, she was a breath of fresh air. She has a sot of Karmic way of looking at the world.

As the story progresses, we soon realise the plot is not nearly as straight forward as we are first led to believe.

But I can’t give the book a perfect rating, and that’s unfortunately because of the ending. I believe Ben wrote all 3 books of the trilogy in one go, and that kind of shows. Book 1 doesn’t so much end, as just leaves off at a suitable junction. There’s no real climax, so the book never led me up to a big “WOW!” moment.

Chasing Graves gets a solid 4 stars from me, and I believe the sequel, Grim Solace, has just released… so I’ll be jumping on that pretty sharpish!