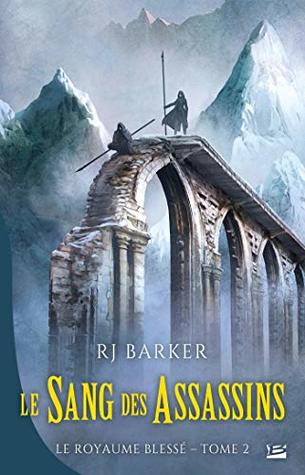 Yes, I’m using the french covers in these reviews because they are so fucking gorgeous!

Book 2 of The Wounded Kingdom trilogy, Girton Needs a Slap – no, look, I’m allowed to call it that. RJ himself calls it that… and it’s true. Oh dead gods, is it true! Back to the review. Blood of Assassins is a book that could not have worked without book 1… A stupid statement, I know. The same could be said of almost all second books in a trilogy. But it is even more important a sentiment in this case. If this had been book 1, I would not have finished it. But as it’s book 2, I loved the shit out of it!

Girton spends the majority (about 99%) of this book being a petulant arsehole of a character who… well, he needs a good slap. With the attachment I formed in book 1, without being so invested in his character (and Merela) already, I could not have got through book 2 without grinding my teeth to dust. Yes, he is that much of an angsty little prick. BUT, because I was already invested in his character, it worked because I was rooting for him to see past his angst and redeem himself. I was rooting for him to overcome his flaws, and I feared that he might not. Honestly, this book was tough to read at times because I dreaded what was going to happen.

So BoA picks up 5 years after AoA left off. Girton has been out in the world, acting as a mercenary, and he’s done some real nasty shit. He’s seen things. He’s done things. And he is struggling to come to terms with those things. On the other side of the world, the Tired Lands are at war. 3 kings (all old acquaintances) have been battling it out to see who will get to rule. And then Girton returns home to throw himself right into the thick of it.

In many ways BoA follows a very similar structure to AoA. There is a mystery to be solved and RJ laces the narrative with subtle clues, red herrings, suspicious characters, and outright lies. He certainly keeps you guessing, and every time you think you’ve figured out the culprit… you’re wrong. Nope, you’re wrong. Just wrong. It’s not them… or is it? Girton doesn’t have the assistance and wisdom of his master this time around, but it’s OK, because he has his own pig-headedness to make up for it. There’s a lot more action in BoA because there’s a war going on and Girton finds himself in the centre of it all. There’s plenty of scraps, some chaotic battles, and SO MUCH INTRIGUE.

And I have to mention the battle. I spoke to RJ after finishing AoA and he said there’s a scene (a siege) in BoA that he was really proud of. I can see why. The siege in question is one of the best written, most engaging battle scenes I’ve ever read. It is beautiful and horrific, balanced on the edge of a knife, and has imagery that just leaps off the page. I could actually see it all happening. Just amazing. Which also brings me to the weird way in which RJ writes action sequences in this series. Every time the action ramps up, he swaps from past tense to present tense. This is breaking the rules and 99 times out of 100 it would drag me out of the narrative and really hurt my enjoyment of the book. But RJ manages to make it work, and it only serves to heighten the tension, making the action more urgent.

Yeah, OK, I’m gushing. I loved the book. Deal with it. I have nothing really negative to say other than a few plot points were wrapped up a little quickly, seeming a bit rushed, but they’re so minor it really didn’t hurt my enjoyment. Hells, I read the last 150 pages in one day and that’s pretty damned rare for me!

So I’m giving Blood of Assassins a roaring 4.5 and rounding up to 5. I loved this book, even more than the first, and I can’t wait to start King of Assassins… which I will be doing today. 😀