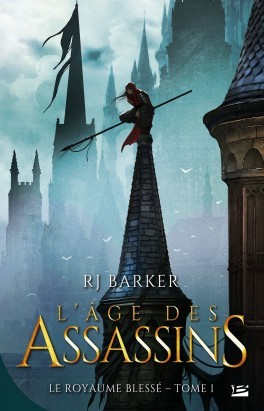 A ‘who dunnit’ in reverse.

I’m gonna start this review by pointing out the main character in Age of Assassins is a young lad by the name of Girton… and for some reason my crazy brain says “hears a who” after every single time I read that name. This has nothing to do with the book, but I felt the need to tell you all.

Age of Assassins is a weird who dunnit in reverse where the murderers are doing the investigating, trying to find out who hired them. It’s a murder mystery without a murder. It’s also an oddly innocent tale of a young boy learning what it means to be a young boy for the first time.

Girton (hears a who) is an assassin in training. He’s spent the past decade-ish of his life with no company save for his master, and as such has no real idea how to act like a normal person. Which is fair because we all struggle to person sometimes. He’s cold, calculating, and sarcastic. He also has a club foot, which we’re told has something to do with the magic of this world having ravaged the land. The most interesting thing about Girton was the way he slowly becomes a real boy after spending time with other people his age. It was interesting watching him go from cold and calculated to hot headed and temperamental. Almost like watching him hit puberty for the first time. Congrats, you’re a teenager. This made him hard to like at times because… teenagers gotta teenager, but the development of his character was plain to see and made him feel very much alive.

As the plot progresses we get to know some of the other characters a bit better, including a wonderful look at Girton’s master, Merelah. There was a depth of emotion built into this character that was both subtle and powerful. Watching her secrets come to light and how that effected both her and Girton, as well as the way the dynamic between the two characters changed, was a real highlight for me.

As for the plot itself. Well, it’s a damned murder mystery so I really can’t give much away without spoilers. Suffice to say it moves at an excellent pace that never felt boring. There’s enough twists and turns to call it spaghetti. And it all felt wonderfully natural and real. There’s political intrigue at play at all levels in this book.

I have just one small gripe and it’s that the finale felt a little rushed. Almost as though there needed to be a big fight at the end, so one was shoehorned in.

Age of Assassins is kinda like Robin Hobb’s Assassin’s Apprentice, but with the pace ramped up to 11. It’s fun and heartfelt and will keep you guessing. I must have liked it because I immediately picked up books 2 and 3.

A well earned 4 stars from me! Loved it.