Gather round, children, for another author is about to step into the confessions booth to admit to you all his dirty authory sins. Today, for your judgment, we have Ben Galley, author of The Heart of Stone. Should we ring the bell of Shame?

I genuinely think the word “moot” is the finest word in the English language.

I wrote my first full length novel around 11 years old. It was about anthropomorphised monkeys living in southern India, and a complete ripoff of Brian Jacques’ Redwall books, which I will forever hold in lofty esteem.

I can never remember, without looking it up, what the difference is between “practise” and “practice”. Try as I might, it won’t stick in my brain. I’m even googling it right now.

When publishing my debut novel, The Written, in 2009/10, I was inordinately skint, so I convinced myself that I didn’t need an editor, and that I could do the same job if I just went through the book enough times. Problem was, I didn’t have the grammar skills to notice where I’d gone wrong, and published it riddled with errors. Fortunately, I had it proofread a few months after the release, and rereleased with the second book’s launch.

I am constantly terrified that one day I’ll turn up to a book convention or event and somebody will have a question about an older book I’ve written, and I won’t actually know the answer. (And I’m naked.)

In one of the versions of my Emaneska books, I swear I gave one of my main characters a surname. I’m convinced I did it, but have never been able to find it, nor remember what surname I would have given him. It haunts me continuously just in case I use the same name somewhere else, a clever reader spots it, draws an epic yet wrong connection, and all my fictional worlds implode in on each other in a big blast of fire and shit.

I more often than not imagine Morgan Freeman’s voice reading my descriptions whenever I’m editing. I find Imaginary Morgan has the perfect pace for analysing and measuring a sentence. If I can’t imagine it in my head, I’ll do his voice out loud.

I do a terrible Morgan Freeman impression.

The first ever thing I wrote was when I was about 5. It was an 8-page, printer paper, pencil-drawn comic about Christmas, with Santa and Spiderman as the badly drawn heroes. There was also a game in the back with a “mirror writing puzzle”. I tried about a dozen times to get the mirror writing to work, and spent so long erasing and redrawing the page that I crumpled up the rest of the comic. My mother says I cried, but I refute that claim.

I tried writing in 2nd person POV once, just before starting The Heart of Stone. I found it so unfamiliar that I spent weeks battling to get into the mindset, only to get annoyed with the plot and shelve it. When I came to writing The Heart of Stone, I was so entrenched in 2nd person, the first draft constantly switched between 2nd and 3rd person without me noticing, and to infuriating levels that delayed the editing phase considerably.

I put a reasonably graphic sex scene in my debut The Written. I was so wrapped up in getting to the editing stage, I immediately asked a family friend to beta-read for me, as she was incredibly well-read. In my excitement to see what somebody thought of the novel, I completely forgot that the sex scene existed, never mind the fact it involved a character that bore a striking resemblance to the beta-reader’s daughter – my girlfriend at the time. They almost had the same name. I removed the pages from the printed-out copy I gave her and kept quiet until the book came out.

As a shameless LotR fan, I went to see The Fellowship of The Ring 11 times in the cinema the month it came out.

These are my confessions. Forgive me, audience, and may the gods have mercy on my shit-smeared soul. 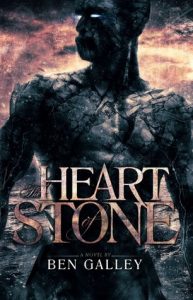 Ben Galley is an award-winning purveyor of dark fantasy from the UK. He is the author behind the gritty and epic Emaneska Series, a western fantasy series, The Scarlet Star Trilogy, and the new standalone The Heart of Stone. Aside from writing and dreaming up lies to tell his readers, Ben works as a self-publishing consultant and tutor, helping fellow authors from all over the world to publish and sell books. His website shelfhelp.info will tell you all you need to know about DIY self-publishing. Ben can be found being loquacious and attempting to be witty on Twitter (@BenGalley), Facebook (/BenGalleyAuthor) or at his website bengalley.com.